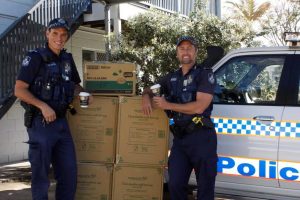 Drop into one of our local cafés for a cup of your favourite brew and chances are you’ll be leaving with a cup full of information relating to domestic violence as well.

Last month saw the roll out of a Gympie Police project in which disposable takeaway cups were printed with a domestic violence awareness message, as well as contact details for domestic violence support agencies.

These cups have been distributed to local cafés throughout the Gympie area, including here on the Cooloola Coast.

The man behind the initiative, Detective Sergeant David Britton of the Wide Bay Burnett District Child Abuse and Neglect Unit, successfully made application through the 2015 Safer Queensland Community Grants Program – a partnership between the Queensland Police Service (QPS) and Suncorp – for funding to have a number of disposable coffee cups printed.  Suncorp provided $3250 to fully fund the initiative.

You may think that domestic violence isn’t much of a problem in a small town like Rainbow Beach, however Mick and I continue to get called to incidents ranging in severity from verbal arguments or threatening phone calls to serious assaults.

There is a common misconception that domestic and family violence is a private or family issue and ‘none of my business’, but when someone is being hurt or is living in fear, someone needs to step in and help the victim as they may be too afraid or ashamed to speak up themselves.

The messages on the disposable cup say it best, ‘Domestic Violence is unacceptable – Let’s make a stand’ and ‘Let’s work together to STOP domestic violence in our community’.

Distribution of the 17,000 takeaway cups commenced in August 2016 and it is hoped and anticipated that more discussion and awareness of the issue will increase community engagement and empower those involved to contact QPS or seek support as required.