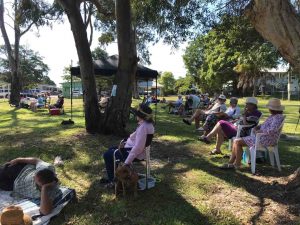 This free concert was given by local artists who enjoyed the chance to perform and gave all who were there the opportunity to find one style, at least, that gave pleasure.

The classical mandolin music of Sue, with Pam at the piano, took us to the film music of Schindler’s List and then Saltarello, a very fast medieval dance.

Also in the serious music category was The Secret Garden, played by Debbie on flute with Pam accompanying.

A harmonic version of Carole Bayer Sager’s The Prayer was arranged for flute (Debbie), tenor recorder (Len) and piano (Pam).

The afternoon was opened by the Cooloola Coast Ukulele Group led by Marilyn and Frank, followed by their own performance and then their new group of banjoleles.

Robert sang some traditional folk songs adding the harmonica at the end. Other local artists included Ron and Irene who put guitar and ukulele together and sang, Laurence who sang to guitar, and Rob who has become so familiar playing his own compositions based on life in Tin Can Bay and spreading the music as far as Gympie.

Favourites in this wonderful town were Gail and Gunther, surprising us all with his treble recorder playing and Gail’s lovely guitar and singing.

A new presence in our midst is another pianist Joyce, who, on two pianos with Pam, played duet arrangements of The Arrival of the Queen of Sheba by Handel, an Eastern melody from a ballet called Scheherazade and the lively dance from Children’s Games by Georges Bizet.

Towards the end of the afternoon we heard the beautiful tone of Len’s harmonica playing, always accompanied by his partner Pam on the piano, and the welcome presence of Sue and Lu on mandolin and guitar, excelling as usual as the ultimate professionals they are.

Finally ending with Keith Gall who has brought traditional Australian folk songs to many venues in town.

After the thanks given to all who supported this venture we all hummed or sang to Laurence’s Maori Farewell, Now is the Hour for us to say Goodbye….

Thanks to Creative Arts Gympie Region, who supported Pam in this event and arranged insurance; to Cr Jess Milne whose timely advice and knowledge of the area helped to make this happen; to Kevin Reibel for finding the stage backcloth and assisting members of the Mens and Community Shed for their physical presence erecting same. Assistance came also in keeping Queensland Health Covid-19 rules in completing forms, etc.

Also I’d like to thank Cooloola Cove Residents and Friends members for their support manning one of these stations all afternoon and Coolabay choir members for helping pack up at the end.  I’d especially like to thank Lucien Lowe for his professional management of the sound system he provided. A very enjoyable event for our (60+) audience.