Four hundred competitors were warned not to cycle out to the golf club (it’s happened before!), when students from 22 schools around the region converged on Tin Can Bay for the annual triathlon.

Held Friday October 25, they started with a swim a Tin Can Bay Pool (up to 17 laps for the 19&Under), they then cycled against a fierce wind from Norman Point to Crab Creek return (7km loop). Transition was adjacent to the pool, where they then ran to the skatepark or half that distance. Mr Arthur also explained the definition of an esplanade, and that they must remember to compete alongside the water.

The day finished with a Cooloola Crocs Swim Club serving up pancakes and fruit. The wonderful SES volunteers said everyone was very well behaved, and the organisers thanked Paul at the Pool and the Tin Can Bay Police (3 cars and one bike) for ensuring safety on the day.

It was great to see more students participate as individuals this year at RBSS. James Worthington ran a tight race with Hugh Gilmore only six seconds out, placing them 5th and 6th in the 12&U boys with Brayden McGrath close behind (9th). Tin Can Bay School representatives also ran well in the 12&U girls with Paris Delroy 5th and Rochelle Commandeur equal 8th. Gympie High’s Kate Gilmore (GSHS) achieved 3rd and St Pat’s Madalyn Reibel  8th in 14&U girls.

Kirsten Kenney 1st in 16&U mixed team, Paige Reibel achieved 2nd 16&U girls teams (completing the swim and bike legs) and Tom Kenney 2nd 19&U Mixed team. Paige also scored some goggles in the Sportspower draw, along with some lucky others.

When the crowd was asked “Who’s never done a triathlon before?” an overwhelming number of hands went up. The camaraderie between team members was obvious – and keen competitors were encouraged to apply for Wide Bay Championships. It would be great to see such a turn up to the Rainbow Beach triathlon!

Remember there are lots more photos on the Rainbow Beach Cooloola Coast Community News website and facebook page. It must take a bit of maths working out those staggered race times. The day always runs so well, thank you to all the teachers and support crew involved who make it such a success. 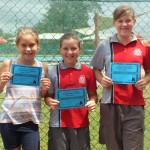 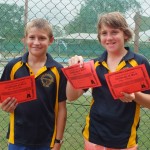 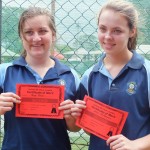 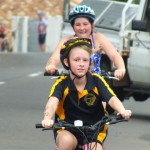 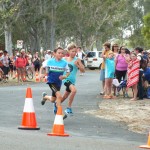 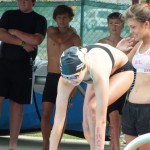 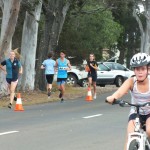 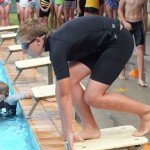 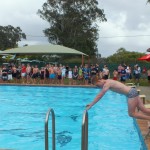 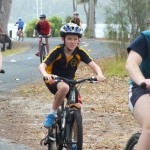 Crystalrose McKenna brings it home in the cycle leg

Hugh and James kept taking the lead off each other

Kate achieved 3rd place in the individual 14&U

Hayley Carnellor on the bike, with Lauren Palmer sprinting home

Brayden McGrath on the blocks

Samuel Sharman powers on his bike