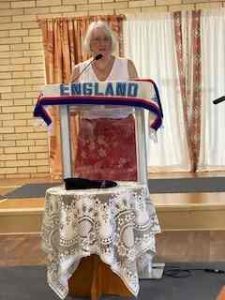 This year’s focus was upon England, Wales, and Northern Ireland, with the theme, “I know the plans I have for you”.  Forty-five people gathered at the Cooloola Cove Veteran & Community Hall.

We are indebted to Rev Gary McClintock and his parishioners, Kevin, Jeanette, and Rob for the rousing, joyful live music and singing of the hymns.  “For surely I know the plans” was especially composed for this Service.

Guest Speaker was Mrs Jacqueline Cross, parishioner of St John Vianney Catholic congregation, who spoke about growing up in England and the history of the Staffordshire Potteries – the industrial area comprising of the six towns Burslem, Fenton, Hanley, Longton, Stoke, and Tunstall that make up the city of Stoke-on-Trent.

Fascinating to learn about Josiah Wedgwood, his factories, Royal Doulton, and Jacquie’s family connections with The Potteries. If Jacquie and husband Dave had not emigrated to Australia, they would have been part of the Wedgwood workforce.

An insightful talk, enhanced greatly by Jacquie’s exquisite display of old Wedgwood handpainted figurines, a very old mug, and other fine examples from Stoke-on-Trent. Jacquie strongly encouraged us to go to the United Kingdom, to get out of the cities and explore the real country, the villages, towns and landscapes.

$435 was raised for the Bible Society Project in Northern Ireland.

As per usual on the Cooloola Coast, we were spoilt with a variety of scrumptious sweet and savoury platters, brought by participants of each congregation.  here was lots of chatter and ecumenical fellowship.

Fr William closed the Service with a special prayer for the people of Ukraine.