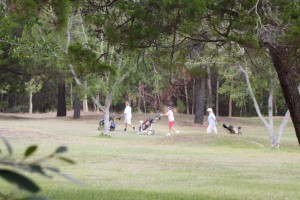 The members of the Rainbow Shores Social Golf Club were both shocked and extremely disappointed to be advised on Friday June 13th that the owners of the Golf Course had taken the decision to close it, effective that day. No prior indication of the closure was given.

In fact we were to hold the final round of our annual Club Championships the following Sunday, but were not given the opportunity to do so. The Social Golf Club has provided a regular steady income to The Shores Complex and the decision taken by the owners without any prior discussion or warning has had a poor impact on the people who supported their business over many years.

The Rainbow Shores Social Golf Club was first formed by a group of men who met and played golf of a Friday afternoon. This was made possible by the then developer of Rainbow Shores, Kurt Krauchi, who built the course and was a great lover of golf.

Kurt Krauchi, Joe Casey, Rodney Gray, and Peter Wallace were instrumental in getting the club off the ground. The first recorded President was S. Ferguson, Captain R. Tredwell and Treasurer J. Casey in the year 2003. First Secretaries were G. Adams and J. Casey in 2004

The club, over the years has donated money to many charities including RSL, MS, Epilepsy, Medical Transport and the Community Resource Centre. The club also donated money to skills training in golf for children at the Rainbow Beach State School.

Currently there are 60 members of the Cub. We have regular turnouts of 20 – 25 people for the Chook Run and Sunday games. On Tuesday mornings 10 – 12 ladies would play.

The Shores course was a challenging Par3, many of the players preferred it to the larger courses. Sadly many of the members will not necessarily be able to continue to play golf on the larger and more distant courses. Golf was also the only sporting activity available to the ladies of Rainbow Beach.

The closure will affect not only members, but other people in the community who played on the course, as well as the many visitors to the town who enjoyed a round of golf during their stay.

On behalf of all members, the committee would like to express genuine thanks to the management and staff of The Shores complex, for their courtesy and support over the years.

Over the next few weeks the business of the Social Golf Club will be wound down, and sadly there will be no more golf in Rainbow for the foreseeable future.

Ed: RBCCCN thanks Rainbow Shores Social Golf Club for their support of the Community News and the community over many years. On request of clarification of the closure, we have received no comment from the owner.