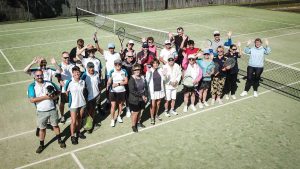 Teams from Rainbow Beach, Kandanga and Gheerulla converged on Tin Can Bay with Team Tin Can Bay managing to win all three – the Men’s, Ladies and Mixed Doubles events

Small communities Tennis Club teams including from Rainbow Beach, Kandanga and Gheerulla converged on Tin Can Bay to compete in the “Tiny Towns” Men’s, Ladies and Mixed Tennis Tournament.

The tournament, the first of its kind for our region, was played at the Tin Can Bay Tennis Club courts where the local Club also fielded their own team to take on the in-form visitors.

The event took on an almost festival atmosphere as supporters, families and friends of those competing spilled out on to the surrounding park land to get the best views of the thrilling on-court action. The high standard of play drew plenty of cheers and applause from the appreciative crowd.

Tin Can Bay Tennis Club Vice President, Bernie Sutcliffe, could not be happier with how the tournament turned out. “Exceeded all expectations, it was a fantastic day, great for the area and great for our Tennis Club” he said.

The all day tournament came down to three exciting Finals matches with Team Tin Can Bay managing to win all three – the Men’s, Ladies and Mixed Doubles events.

Tin Can Bay Team Captain, Peter Thwaites, was full of praise for his team but also humble in victory. “My team played some of the best tennis I have seen them play but all matches were extremely close fought affairs with only a few points being the difference. I think we may have been just a tad lucky on the day” he said.  “I’m so proud we’ve achieved this amazing result for our small tennis club. Everyone will surely be ecstatic” he added.

The stand-out of the day was the level of friendliness and comradery on display among all those attending.

Rainbow Beach Team Captain Darryl “Daz” Gauld who was instrumental in making the Tournament possible best summed it up. “I have always observed a commonality across Tennis Clubs – they were among the first to set the standard for being welcoming, friendly, inclusive, etc before it became fashionable. Tennis players play the ball, not the person.” Daz said.

While Tin Can Bay Tennis Club may have come out on top as Tournament Champions on the day, it seems the real winners were all those who attended from their respective communities who have left Tin Can Bay with new found friendships and pleasant memories of wonderful hospitality!