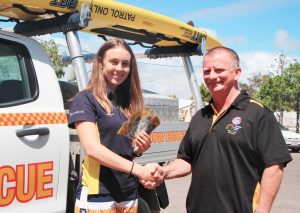 The Rainbow Beach Surf Life Saving Supporters Club has acknowledged one of its major suppliers, PFD Foods, who has generously donated $1000 cash to Ms Elizna Smit.

Elizna is the Club’s entrant in the Summer Surf Girl Competition, which promotes Women In Surf and increases their profile as individuals, and raises money for their local surf club.

Supporters Club President, Mr John Greaney, said, “It’s pleasing to see a business partner of the Supporters Club appreciate the involvement we have in our community.”

Elizna was most surprised when she found out about PFD’s generosity, “It gives me a great platform to reach my goal, I’m so grateful. I would like to thank the Supporters Club and PFD for this kind donation.”

Well on her way to her target of $5000, the nineteen year old Bachelor of Sports and Exercise Science student says she is balancing fundraising around her studies – and currently completing her Cert III and IV fitness courses.

Thanks to Manager Bruce Lange, our Surf Girl has been busy with raffles, “They’ve been on the weekend at the Surf Club, it depends on when I have patrols.”

Added to that were proceeds from her Australia Day stall and it is all adding up towards the Summer Surf Girl judging week in May.

Remember that a meal out at our Surf Club helps keep Rainbow Beach safe – say hello to Elizna and buy a ticket next time you are there!