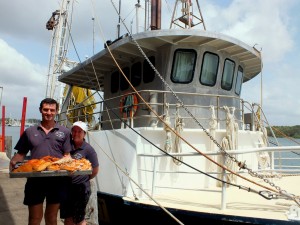 Peter Lee is at home digging ice as he is negotiating international deals. He tells us about his adverse beginning in the family trade, the challenges faced now  and how they cracked the overseas market.

Peter was shovelling when I first caught up with him. He and his wife Lisa run Lee Fishing Company on Norman Point, Tin Can Bay.

This family run, locally owned business has been operating since 1951 when patriarch Vern Lee commenced estuary fishing and crabbing in Tin Can Bay.

Peter says, “My grandparents were in their teens when they moved to Tin Can Bay. Dad’s father was an estuary fisherman, with a small, flat bottomed boat.”

Vern worked with his Dad in the estuary until the mid 60’s when he built the trawler, Kerry K – named after his daughter and wife, Kay.  Then Vern and Kay built another timber vessel in 1973, expanding their prawn fishing fleet, building up the business into 13 trawlers.

“It was a really good fishery,  dollars were good.” 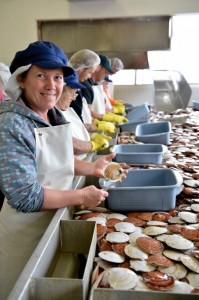 Lisa says, “Peter’s mother, Kay, is the backbone of the business. She is still here when Peter has gone home! If we are short on staff- she’ll still give us a hand for the day.”

Today Lee Fishing Company is a fully integrated operation incorporating catching, processing and marketing. They specialise in export quality fresh and value added seafood product, supplied to the seafood markets in Sydney, Melbourne and Brisbane, and more recently overseas. They also are popular for locals and tourists – with Thursday deliveries to Rainbow Beach. Kids love the window, they can check out seafood processing and filleting by hand.

Peter and Lisa are an indefatigable team, pinning them down is no easy task between the demands of processing, deliveries, even helping out other trawlers. Even though they were generous with their time, this story would have made an earlier edition, excepting Peter had been out all night trying to salvage another trawler.

A life spent fishing wasn’t always on the cards for Peter, “I wanted to be a fitter and turner…  and nearly began an apprenticeship.” Instead, he started on the boats in 1979, and once again his future could have been very different.

“I went into the family business as a deckhand at 15 years. Dad took us out and I was violently seasick, the worst seasickness! I would come to port and say never again, and then two days later I wanted to go again. No one forced me.”

Peter says he coped with the affliction by working through it. His dogged persistence on the trawlers paid off, although it took him 12 months to get over.

He has had his share of pitching and rolling, and cyclonic weather – in fact he and his wife Lisa worked on a trawler together for 2 or 3 years before they were married.

Lisa started in the processing plant in 1992. Her parents Keith and Lillian Clark moved to Tin Can Bay in 1983 when her Dad accepted a position in charge of the ambulance station. That was back in the day they were manned by only one person. Lisa worked at the bakery, as a dental nurse and the pub cook before she commenced work at Lees.

Together as managing directors they have built up the business, and tackled the daunting international market.

Peter explained that the longer seasons and larger supply of seafood required more sales, sales that they couldn’t reach in Australia.

The decision to attend a tradeshow in Hong Kong to meet buyers was a good one. “The best thing I’ve done was meeting people – I got into exporting and offshore markets for scallops and spanner crabs.”

“We now send seafood to Vietnam, Hong Kong and Indonesia, and we’re in talks with two other countries.”

When asked about the challenges he faces right now, Peter says it is a full time job trying to decrease overheads. At the moment, they are considering solar panels to reduce expenses.

Peter says that in seafood manufacturing he is competing with markets in other countries, and cheaper products in Japan and Canada.

When asked if Vern had retired, Peter laughed, “We should have never let him get bored. At 76, he has energy to burn, and is very active in our company. Dad is looking after trawlers in the Arafura Sea and based at our Indonesian offices in Jakarta.”

In fact, Peter’s entire family (3 brothers and a sister) has been involved in the business over the years. “Bruce manages things in Jakarta. Darryl ran the factory for seven years, skippered boats and now works in the mines and he and his wife Vicki runs the Snack Shack. Kevin skippers a prawn trawler and manages other trawlers – we now have three fishing vessels. Kerry, my sister, used to skipper boats, now she is out of the industry and drives heavy machinery for the forestry.”

For someone who describes himself as having “been here forever” and “never lived anywhere else”, Peter is very humble about what he says is “only a small business”.

As the interview finished, he admitted, “I feel like my head’s going a million miles an hour, there’s a boat coming in, a shipment leaving Sydney…..” Businessman Peter, was already concentrating on the next task at hand.