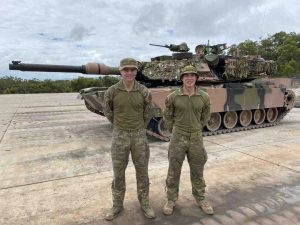 I have lived on our coast for over 15 years. I’ve heard the ‘booms’ in Rainbow Beach from the Army training. Our daughter worked there a couple of years back – but the closest I’ve ever been is to the gate.

When I read the 2/14 Light Horse Regiment (Queensland Mounted Infantry) will be conducting a live fire exercise at Wide Bay Training Area, I didn’t hesitate!

Two TV crews and I were met at Camp Kerr, and followed the officers in convoy – along Tin Can Bay Road, through that gate along a track to another boom gate.

I parked exactly where I was supposed to – because I was told the force of the firing has been known to ‘affect’ windscreens!

After a safety briefing; double plugging our ears – we perched up on the tower balcony ready to watch, with students and Indigenous elders.

The tanks were over 50 metres away, and you could just see Carlo Sandblow. There was a lot of preparation but pretty soon the ‘t-t-t-t’ firing began. The big tanks scanned for targets and conducted ‘serial’ fire which were timed and scored.

I was really glad my elbows were on the balcony ledge when I heard the first BOOM! Wow – I’ll post the videos, but they don’t do it justice.

Eventually, the tank drove off the concrete firing bays to the field below – aiming and firing.

Two of the crew chatted to us afterwards. I asked where they will serve on ANZAC Day? Corporal Justin Choiatto said he’ll be giving a speech at a high school and likely attend a city march.

Trooper Dade Goldberg smiled and said he’ll be on horseback, and he’s been training two years for it! He spoke about his role in the Army and said, “There’s no better job!”

Wouldn’t it be great if more locals and students could experience how Defence personnel skill up in our ‘backyard’, including in our streets.

Thankful of my intact windscreen, I followed the convoy out – back to mundane groceries and newspaper deadlines. But what a thrill to peek into how our soldiers train, and to visualise what makes those booms!