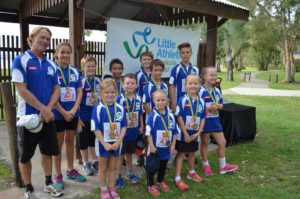 Cooloola Coast Little Athletics fosters a family environment that builds on confidence and physical development through skills training. The athletes this season went on a journey against themselves as they were tested via their personal bests. Improvements were made so the efforts of their practice and hard work paid off.

All athletes received participation medals in a presentation ceremony on the Tin Can Bay foreshore. These were well earnt as everyone grew during the year and now have firm roots which to branch out from in the 2018-19 season.

Coach Bill introduced a new award to highlight the efforts a male and female athlete put into the training sessions. The first Sports Star Awards were presented to U7 Zack Groves and U6 Amanda Geurts.

The Athlete of the Year is for outstanding performance for the whole of the season and for the second year running Anjelica Geurts received the trophy. Her attitude and determination to push her boundaries was noted by Coach Bill and this was evident when she kept plowing through the burn during a 20 min run. Well done Angie!

The 2018-19 season will commence in August. If you would like to receive an automatic notification for sign on details,  email: ccla2014@outlook.com. For further information call Centre Manager Jess Milne on 0411 218 254.