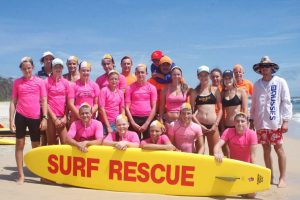 The Bronze Camp is on again in September – from 13 and up!

“Numbers are definitely up,” said instructor Mark Lawler when we caught him mid week in the Bronze Camp.

In fact 13 were enrolled for their Bronze Medallion and five for the Surf Rescue Certificate, up by one third from last year.

“From the first day, we knew they could all swim, all competent in the water and they all looked after each other – you couldn’t wish for anything more! The parents have done a really good job.”

He joked, “I should be paying someone to do this!”

A further twelve lifesavers were trained in the IRB course – as “crewies” in the inflatable rubber boats, with one gaining their silver medallion IRB driver.

This doubles the attendance on the course from last year.

If you talk to the teens, it’s an adrenaline rush.  “Sick” was what I was told, “It’s exciting – you just don’t know what will happen.”

Even though there were plenty of bruises to show, it was all smiles at the proficiency.

Many of the group were Nippers, and members are pleased that there are strong groups of older Nippers coming through the system.