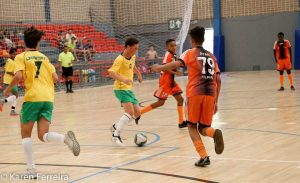 Levi McDermott returned from Brazil after playing football in Buenos Aires, Rio and is now in Paraguay, training for the next comp in Rio.

Said father Greg, “He is loving the training and he said the kids are amazing, a group of kids have been following them around, and with the police help cordoned off a street and played the kids in street soccer.

“The tournaments are very hard, as they have put them up against the under 17 Brazilian youth squad, Levi scored but they lost 5/2.”

“We would also like to thank the community and private donors for all their generosity, for without them this trip would not have been possible.

Levi was also one of 20 sporting champions in the Wide Bay region to receive a sporting grant from MP Llew O’Brien. His $500 helped pay for the Queensland Schoolboys Soccer Championships.