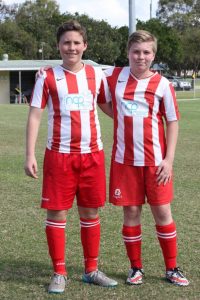 Lions members, Levi and Flynn McDermott are soaring with their soccer

The brothers McDermott are having a great run with their soccer.

Levi went to Brisbane in September to play the National Schoolboys Indoor titles. The team that won the comp beat them 3 to 2. Levi was picked as the team’s player of the tournament.

His dad Greg said, “Levi was then picked in the Australian Team to travel to Brazil in 2017. They travel to Maryborough for continued training, so even though it is off season it does not seem to end.”

This comes after his trip to Europe, when Levi played for the  Australian Schoolboys Indoor Soccer Team.

Brother Flynn is also training too in Maryborough, and is in the Futsal Programme at Gympie High School.

Greg was delighted that he and Levi were selected out of hundreds of kids to attend the Westham Academy on the Gold Coast. The two boys were privileged to train four days with specialist coaches from London.