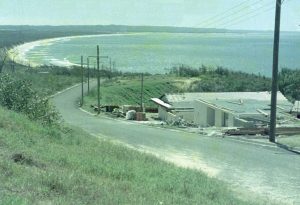 In a recent article, I told the story of the first Government Land Sale at Rainbow Beach in 1969. Although it was relatively unsuccessful with only seven out of 25 blocks sold.

Widgee Shire Council, the local authority, had not been deterred and pushed ahead with promoting the new town. It was three years before the Lands Department attempted another land sale in 1972 but there was a lot of development in between.

An early development was the Rainbow Beach Surf Lifesaving Club. As soon as access to Rainbow Beach became available in 1965 a move was commenced to form a club, which eventuated at a meeting at the Freemasons Hotel in Gympie in June 1965.

The Club struggled to find funds but after numerous raffles, dances at the Veteran Hall and support from the Widgee Shire Council, sufficient funds became available to purchase the disused Tamaree State School, which was transported to Rainbow Beach and reassembled as a club house.

The old school building served the club for nine years before it was replaced by the present building, which has been upgraded several times since then.

Rainbow Beach’s first businessman was Phil Rodgers. He had been a Gympie fruiterer and in 1966 opened a small wooden shop in the park that now bears his name. He lived in a caravan nearby and opened his shop as required mainly at weekends. 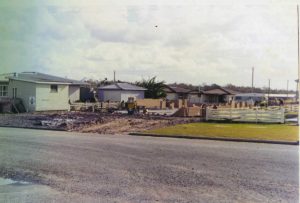 Ivan Udovic’s Rainbow Beach Store is built, the old store on his block moved from park can be seen on left

Ivan continued his duties at the Sand Mining plant, but the business flourished and the shop soon became too small. Ivan, being an enterprising operator, approached the Lands Department to purchase a lease on the adjoining block on which he proposed to build a proper brick store, news agency, fuel outlet and post office.

Being a local he had no trouble securing the land and in 1972 Rainbow Beach’s first general store came into being. Ivan gave up his job at the Sand Mining Plant to manage the shop full time.

The Rainbow Beach General Store is still there having passed through several owners over the years but owned by the Modin family for about the last 30 years. It has been ravaged twice by fire in 1989 and 2016 but always recovers. 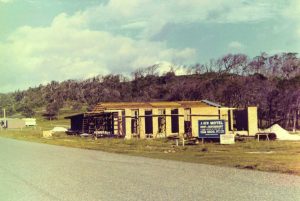 Building the Rainbow Beach Motel July 1971, with the caravan Park in the background

In July 1971 work began on Rainbow’s first commercial building the Rainbow Beach Motel. It was built by Hug Brothers of Maryborough who tendered for the site in May 1971.

In the same year Percival Engineering company of Brisbane tendered successfully for and built the adjacent Caravan Park. By this time, the last of the original 25 blocks had been sold and most of the allotments were complying with the two-year building covenant placed on the original sale.

On February 23, 1972, the Lands Department held its second auction. This time the auction was held in the much larger auditorium at the Gympie City Council Chambers, which was just as well, as 300 people attended to bid for the 40 blocks in Green Valley Drive, Carlo Circle and Cooloola Drive. Upset prices ranged from $800 to $2500.

Keen competition for the blocks in Cooloola Drive on a hill with panoramic views over the ocean brought a top price of $7500 and a total outlay of $171,800 instead of the reserve of $72,400. Big money in 1972 but no doubt the blocks would probably attract over a million dollars today.

Three months later on June 7, a third auction took place for another 38 residential blocks and 5 commercial sites in the same area. Three large commercial site were offered in Ocean View Parade and another two near the top of the hill in Cooloola Drive. 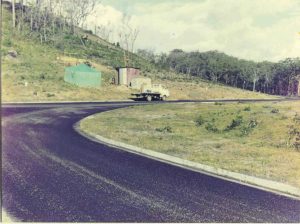 All lots were sold and the sale realised $117,350 against the upset value of $90,300. The two magnificent blocks at the top of the hill were purchased for $4000 each by trustees of the Burchill superannuation fund. The Mikado Motel was built on the site. The Motel has since been replaced by the even more luxurious Rainbow Ocean Palms Resort.

The next auction of 38 residential lots in Zircon Street, Prospect Place and Spectrum Street was held on April 16, 1975. This auction was incredibly successful with most blocks doubling their upset price.

The hammer would fall again two years later on May 24, 1977, when four business sites in Rainbow Beach Road including the Rainbow Sands Resort were auctioned. Also snapped up were 44 residential sites in Turana Street, Larapinta Street and Double Island Drive.

Another two auctions were held in 1978, which were probably the most successful ever undertaken by the Lands Department. The 90 blocks offered were sold for a total of $1,037,300. Top price for a residential block was $20,300, while a business site was sold for $65,000.

The same year also saw the opening of the first hotel, after Hug Brothers successfully tendered to the licensing commission for a hotel license for the Rainbow Beach Motel, which was then expanded to make room for a public bar and lounge areas.  (Note: The original Rainbow Beach Hotel was on the corner of Rainbow Beach Road and Wide Bay Esplanade where the Plantation Resort is now.)

The next auction was in March 1982, another large auction with 84 lots on offer. Of interest this time was the need for industrial land in the expanding town and 12 blocks in Karoonda Court were sold.

The final Rainbow Beach land auction was held in Gympie on June 22, 1983, with a total of 54 blocks going under the hammer. Two blocks, lot 1 and lot 2 of Section 1, not offered in the original sale in 1969, were listed in this sale.

Although there were no more auctions, development continued. Rainbow Shores was developed and subdivided by the Krauchi family from former sand mining leases. Today the community looks with interest at the fenced of area where the Queensland Titanium Mines dry plant once stood and ponders what development may occur north of the town.

Government sales brochures show the history of growth in town 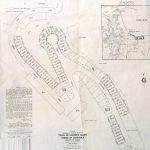 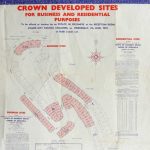 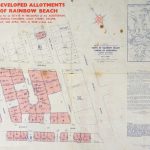 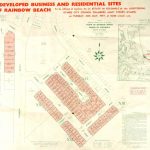 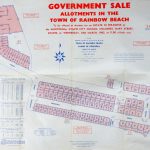 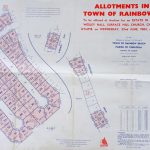