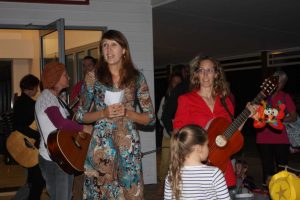 “My lantern walks with me…” As warned, I am still singing this song!

A German tradition was brought to the coast for the second year in a row for the Lantern Walk.

Unlike the “handful” who attended last year, a whole lot more biscuits were consumed last month. I estimated that 200 people attended – many families from Cooloola Cove and Tin Can Bay.

German expats, Corinna Apps and Lucia Phelan who organised what was described as a “super successful” event was grateful for the lovely Queensland winter weather.

“It was 19 degrees, no wind and no rain. We actually could keep umbrellas, beanies and mittens at home. Maybe this is why people didn’t drink too much hot chocolate!” said Lucia.

The event received much positive feedback like: ‘Thank you ladies for sharing such a beautiful tradition and making it our own’, ‘Kids had a ball’ and ‘a special night, well done’.

“Corinna and I would like to say a very big THANK YOU again to all our supporters and participants “It was only such a beautiful night because of all of you!”

“Involving our local school and playgroup ensured lots of families were involved in a process-orientated event over weeks (crafting, music-making and singing, walking with lanterns, celebrating winter with party food)!”

“Elise, Kylie, Ziggi, Sally, Jean and Carla helped a lot in crafting the sun, moon and star lanterns; Brooke and Tina probably designed the most impressive lanterns of the night: a giant globe and Rainbow jelly fish!”

“Kelly from Mainly Music in Cooloola Cove provided space to craft even more animal lanterns after a music session!”

Carla, Michelle and especially Christie made lasting memories of our community event with photos and videos.

“Everyone was so generous, we had a surplus of $150 from the gold coin donations and we have decided to make a single donation to Barnardos Australia to help disadvantaged children in need.”

Locals, Lee, Jean and Sally helped with lots of small but important jobs, Kylie’s pickles for the hot dogs, and Carla and Anne’s delicious biscuits were devoured.

“Tina and Elise practised guitar chords and songs many times with me,” shared Lucia.  Everyone agreed that on the night Elise and her daughters captured a good crowd with their open jam session.

Smiled Lucia, “It was a delightful event and we look forward to another, different and even better Lantern Walk Under the Stars in 2018!”