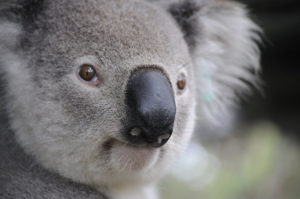 Specially-designed koala warning signs will be installed on Tin Can Bay Road for the first time in the Wide Bay Burnett region.

Acting Transport and Main Roads Minister Leeanne Enoch said the Department had been approached by a local group concerned about koala movements between Tinana Creek and Tinana Road.

“It is important that we do everything possible to conserve and protect native fauna, including threatened and endangered species,” Ms Enoch said.

“Transport and Main Roads staff met with a local koala group onsite to better understand their concerns and are now arranging improved koala warning signage on both approaches to the area.

“The signs will feature flashing lights, which will be activated by approaching traffic.

“The lights will only operate during koala breeding season, between August and November, when koalas often cross the road.

“The improved signs will encourage drivers to remain alert when travelling along this road, particularly during the breeding season.”

Ms Enoch said it was the first time this method had been used in the Wide Bay Burnett district.

“I applaud the local team for listening to the community’s concerns and implementing measures to reduce the risks for wildlife,” she said.

“The new signs are expected to be installed before the beginning of this year’s breeding season.”

For more information, contact 1300 728 390, during business hours, or email bundaberg.office@tmr.qld.gov.au.