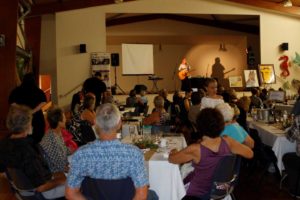 Kids Bush to the Beach Gala Dinner is on Saturday July 14 at the Rainbow Beach Community Hall. The gala dinner is limited to 20 tables of eight, so reserve your table today!

Signage is included for businesses. Make up a table of eight amongst colleagues, friends or family to make sure you are booked in for dinner and the show. Tickets for the gala dinner will be on sale from May 1 at a cost of $50 each.

Last year, the event was run by Rainbow Beach Drought Runners, Tin Can Bay Lions and Gympie Gold Lions. Together they raised over $22,000 to give bush children a week they will never forget away from the drought. It is hoped this year they will raise a similar amount.

Organiser, Tony Stewart said, “We have had enquiries from the Windorah area, some 320 kms south west of Longreach, an area which has missed most of the rainfall and has been in drought for over five years. Schools from Windorah, Jundah, Stonehenge and Isisford are excited to be invited.”

Mr Stewart said, “If your business can help in any way through sponsorship, by donating an auction item, door prizes or by attending, we would be most appreciative.”

To reserve your table, contact Tony Stewart on 0408 767 930 or email rainbowfishing@southernphone.com.au