After a wet, windy cold and washed out day, a good time was had by all at the Rainbow Beach Surf Club and a very encouraging profit of $3,181.10 was made, all of which goes to the Australian Melanoma Research Foundation.

The girls selling raffle tickets were overwhelmed with buyers and had to call in extra help. Emma, Jasmin and Kaitlyn’s Bows & Balloons were a huge success, they couldn’t keep up with the balloons, and sold out of Bows in no time at all. The girls made a huge $220.00 which they donated all back to Melanoma Foundation.

Meghan’s Cup Cakes are the talk of Rainbow Beach, the word is they are the “best cup cakes ever!!” They sold like hot cakes and Meghan made an awesome profit of $550.00, which she donated all back to Melanoma Foundation.

Lyn, AnneMaree, Jodie and Samantha were a huge success with their face painting, even though they were constantly rained on, they painted lots of beautiful and awesome faces and made about $95.00 profit.

The Colouring In Competition was a hit too, with cash prizes for the older kids and Ruthie from Foodworks donated an awesome selection of toys, lollies etc. as prizes for the littlies. Unfortunately the rain washed out most of the entries, but our judges Annette and Peggy commented that some were very interesting (!) and assured us all were of a very high standard !

The winner of the girl’s pushbike was Janine Howlett. Janine and her Family were on their way back to Brisbane when they received the call telling them the good news, so they turned around and came back to collect the bike and we surprised Janine’s Dad with the 2nd prize in the Fishing Raffle (the esky and fishing shirts etc.).The first prize in the fishing raffle went to a well deserved fellow from Tamborine Village and 3rd Prize in the fishing raffle went to “McF”.

There was a blondy haired young boy really harassing lots of people all afternoon as to when the boys bike was going to be drawn “Soon, later this afternoon,” he was told many times by many people. Anyway the time came and this young boy was there, hanging off the back of the truck saying “I am going to win that Bike, you wait and see” Sure enough the ticket was drawn with the name Tim Fuzz, and the young boy jumped up and down yelling Yeeeah!! I told you I was going to win it, I knew I was going to win it, Yeessss !!! Congratulations Tim you certainly deserved to win that bike !!!

SolarDerm from Gympie volunteered their valuable time to come and make us much more aware of the dangers of Melanoma and the signs and changes to our bodies and what to look out for, and to encourage us to have more regular skin checks.

The Jumping Castle and Bucking Bull were a wash out and had to be closed down for safety reasons, but before that happened, kids and adults made the most of the rides, constantly queuing for more. We had to cancel the Bull Riding Competition.

Then came Neil Duddy and his famous Peak Crossing Mini Pigs – what can I say …….. they were sooooo cute !! Unfortunately the weather was against us again, and we didn’t get to hear Neil sing and entertain us, but we managed to get a few races completed and they were soo very popular. During the auction, the bidding on the little piggies was frantic, (they kept our auctioneer Pete from Rainbow Beach Transport on his toes ) and the sweep tickets sold as fast as Meghan’s cup cakes.

Most of the winners donated their winnings back to Melanoma Foundation (thanks guys, that was a wonderful thing to do). People were out to have fun and the little pigs provided that plus entertainment, squeals of delight, laughter, photo opportunities, cuddles and hugs!! 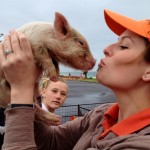 Meg and the piglet 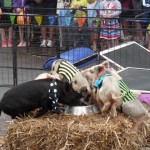 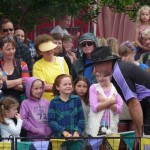 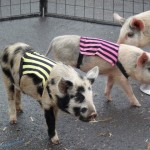 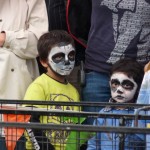 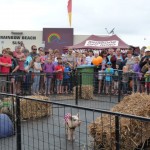 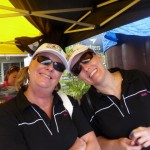 thanks to the team at Ed’s Beach Bakery 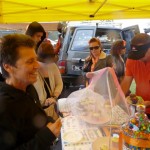 I believe despite the bad weather we had a very successful day and everybody should be very proud!!! The support and donations from businesses, family, friends, volunteers, visitors, campers, fishermen and women has been overwhelming. And from that support and hard work “THE KELLY GANG“ was formed, it goes like this:

“The Kelly Gang“  … working towards a cure for Melanoma !!!

To the following supporters, we are very grateful for your generous donations and support: