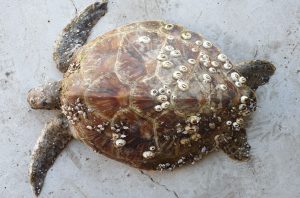 These turtles are long-lived and take 30 to 50 years to reach breeding age and return to the beach of their birthplace to breed. Volunteers will be looking for the distinct tracks up the beach made by the female turtles, who come ashore at night to lay about 150 eggs in nests they dig in the dunes.

Many nests were lost last year due to Cyclone Oma washing them away, so our trained TurteCare leader, Joan Burnett, is hoping to relocate eggs at risk to safer locations this year.

Boaties also need to take care with increased numbers of turtles in the area which is a “romancing” zone, with mating turtles spending more time on the surface where they are at risk of propellor strike.

The cute little hatchlings will start emerging from their nests from late December until about April with most hatching from February to early March. TurtleCare are eager to hear of sightings.

During the next six months, it is important to keep a lookout when driving on the beach at night for turtles coming up to lay, as car headlights can spook the females.

If you see tracks of turtles on the beach, please take a photo and send it to Joan Burnett 0407 810 510 or give her a call. Joan also manages stranded turtles with help from her merry band of volunteers.