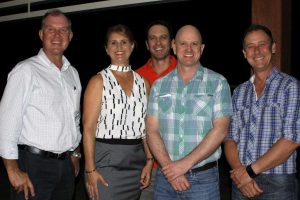 Mr Bennett said, “There have been challenges across the state with access to protected estates. There is red tape around what we do every day.”

They cited that across Queensland, generational farmers who have been there for 140 years have been told to get off their land, commercial fishing operations are under siege and tag-along tours on Fraser Island have been reduced from 5000 to 3000 people.

“What people relied on for decades we want to hold on to sustainably – the last thing we want to jeopardise is the environment,” Mr Bennett said.

“My concern is they still have a hidden agenda.”

Tony Perrett admits, “I’m not convinced that the current government have the best interests of business at heart.”

If you look at Report No. 3, 55th Parliament Agriculture and Environment Committee May 2015, you would agree they have good reason.

A Queensland Parks and Wildlife Service (QPWS) spokesperson told the Community News that, “There is no intention to review the current permit fee exemption arrangements.”

However the report states that, “The committee also sees merit in reviewing vehicle access permits issued after twelve and 24 months of operation to ensure fee exemptions are not leading to unsustainable vehicle access or any public safety and environmental impacts.”

There is also “no intention” to extend the exemption to other residents of the Cooloola Coast. QPWS said they “can access a major business centre more quickly via the normal road network”.

Also, Rainbow residents acknowledge the inequity – the report seems more concerned about more vehicles registering for the permit per household once it was free.

It states, “there is a high probability that many Rainbow Beach residents are using their fee-exempt permit for the purpose of free access to the Cooloola Recreation Area beach for recreational use” (rather than for travel to Tewantin/Noosa).

Locals still want to know why there is a fee on a designated road that happens to run alongside the National Park.

Why are we the only mainland beach with fees?

Is it right that Cooloola is the only National Park to have a vehicle permit on mainland Queensland?

Many locals feel it is a barrier for day trippers and tourism, and an intrusion to our “great outdoors” way of life. Business owners report an impact on local economy, not just Rainbow Beach but also Tin Can Bay.

Is the money returned to our National Park?

They argue they support tourism by contributing directly to maintaining the area and providing facilities.

“Revenue raised from vehicle access permit fees is used to help manage vehicle use and improve safety and conservation outcomes in the area. For example, QPWS spent $675,000 last financial year widening and upgrading the Leisha track.”

That is after deducting expenses required to administer the fees.

If we have to have fees, why not learn from other states?

Our tourists may just want to sightsee from Rainbow Beach to Double Island Point. Where in Australia do you pay $17 to drive 12km?

The Clem 7 cost $3 billion to build, and it is only $4.85 to travel on! Southbank cost millions to build and maintain – and it is available for locals and tourists for free!

The majority of coast residents have to pay to access a natural resource, that you can’t access all day, or every day of the year.

Why discourage people using national parks – what impact can they have on a sand road that is there one minute and gone the next?

Western Australia has an equitable and value-for-money system where you can buy a day park pass for $12, Four weeks for $44 or $88 ($55 Concession) for a year. The difference is this is valid for all parks in WA.

Are the fees really just an exercise to reduce numbers and ecological impact to Cooloola NP area?

NPWS said no, that environmental issues are not managed through the application of fees.

Why then does the report clearly state that “increased traffic in the reserve area may compromise environmental protection and public safety” and that, “vehicle access permits provides a mechanism to manage safety, vehicle access, visitor numbers and behaviour and activities”?

Although there is recognition of Rainbow Beach as a unique situation, the report still states, “this fee exemption may be inconsistent with the objectives of the Recreation Areas Management Act 2006 and purpose of the permit system, especially if the exemption leads to a significant increase in permits issued and/or increased general recreational vehicle use.”

Shouldn’t our government be encouraging people to get out of their households, get active and see our country? Surely eco-tourism and our environment can co-exist in harmony?