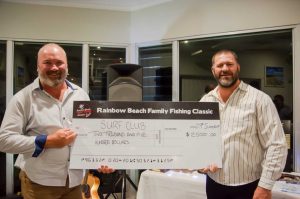 A huge part of what makes this region, and Australia, great is the beach culture and the local surf clubs.

Racing down after school on Friday to get to the club, surf swim early Saturday morning, a couple of days on the beach, learning new skills, mucking around with your mates/girlfriends and then home again Monday morning, straight to school.

Rainbow Beach Surf Life Saving Club is no exception and it’s a culture of fun, healthy choices, support and is ‘the making’ of so many young people.

At the Rainbow Beach annual dinner and awards night, Nathan Kropp (Kroppy) from the Rainbow Beach Sports Club presented a cheque to the President of the surf club, Shane Handy, for $2500 with the words, “and I told you, if you get the IRB team together for the next carnival there is another one of these coming.”

He said: “The Surf Club volunteer their time for the community events; so in return the sports club make a donation to the life savers to keep the flags on the beach.” 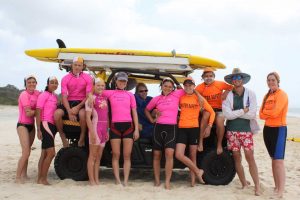 “They can catch the bus down Friday afternoon, stay in the surf club, do their bronze, and be a part of the club, do some work at the sports club for some money, and then catch the bus home Monday morning for school.”

Giving back to the community is part of the role Kroppy sees the sports club performing. “Everything we put on is to benefit the members and their families.

“We held the Bull ‘n’ Bronc this year in conjunction with the surf club and Rainbow Beach Horse Rides. It was the first year and it was a big success for the town with rave reviews by all involved. The club put up the $10,000 prize money and everyone got involved and gave up their time to work together which means a win for the town and a cheque for the surf club.”

So, if you are 15 to 17 years old and want to be part of the surf club culture, grab a mate and give Kroppy a call and make it happen. It will change your life.