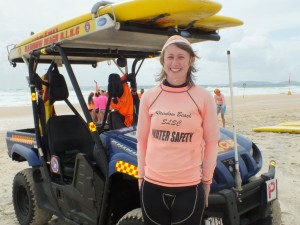 Twenty year old PhD Candidate Emily Simpson is balancing her chemical research at Queensland University of Technology and work as a Lifeguard at South Bank Lagoon to fundraise for our surf lifesaving club, and spread the word about our beautiful beach.

The Summer Surf Girl program has raised more than $14.5 million into Surf Life Saving Clubs throughout the state.  All funds are distributed back into participating clubs. Emily updates the Community News on the quest…

When did you first become involved with surf life saving?

I first became involved in life saving when I was 13 years old. After participating in the Gympie State High School Youth Action Program’s beach based camp, the coordinator and the surf club’s Chief Training officer at the time, Gavin Gagen, suggested to me and a few others that we should do our surf rescue certificate and join the Rainbow Beach Surf Lifesaving Club. It has been the best decision I’ve ever made (or my parents have allowed)!

What was the main reason to be third Rainbow Beach surf girl in three years?

How are you balancing the quest with your studies and other commitments?

Balancing study and Summer Surf Girl is definitely tricky at times and some weeks are scheduled down to the minute. However, I have a great support network with me. My family, my partner and all the surf club members are happy to jump in whenever I need them!

Tell us about your planned fundraisers…

I have several fundraising events being planned or ready to go:

As Summer Surf Girl is also about encouraging current members, I will have regular clubbie and family BBQ’s and will have a surf club races day in the coming month for members and nipper families.

What have you been involved with so far in the competition?

So far I have done school talks at Mary Valley College and Gympie West State School, with the next stop being the Rainbow primary school. I have also been involved in surf awareness at a Gold Coast Triathlon and an event supporting children in foster care.

As it is the start of a new season I have also had a start of season BBQ for members.

I have also been working hard to help with the regular club events, such as the nipper carnival this weekend just gone! All of our nippers worked hard and did so well. It was a great promotion for Rainbow Beach as well as the club!

Not only does the quest raise money for the club, it also helps promote our beach. How will you maximise that?

I wish to maximise my beach promotion with surf talks at the schools focusing around what happens on our beach as well as potentially finding a few new nippers. I will be using social media to advertise my events but also to post pictures of our beautiful beach and update the public on surf/weather conditions.

I hope the family fun days (games day) bring in more people from surrounding areas and wish to support local businesses along the way with advertising my sponsors at my events as well as sourcing my raffle prizes locally – like Rainbow Beach Meats for meat trays!

What help are you looking for from the community?

I would love the community to come along to as many events as possible! Also, I will be going around to Rainbow Beach businesses over the course of the program if any would be interested in sponsoring my events, donating raffle prizes or allowing me to put an event flyer in their shop window, the Rainbow Beach Surf Club and I would greatly appreciate anything!

We wish you all the best Emily and look forward to your reports! Find out more on Emily’s facebook page: “Rainbow Beach SLSC Summer Surf Girl 2014/15 – Emily Simpson”