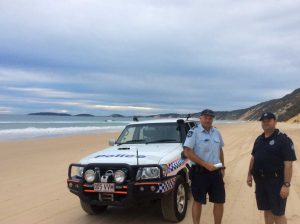 Thanks to Senior Constables Mick Oliver and Steve Moore from the Road Policing Unit, who helped us out with a drug testing operation recently

As I write this month’s article, it’s raining. It’s pouring. I can only assume that there is an old man snoring somewhere, that he’s bumped his head on the end of the bed (and will struggle to get up in the morning)!

If that is the case, the old man will share a bit in common with a 24-year-old local man police came across after midnight recently. Initially, police had been called to the man’s address following reports of a disturbance – but upon arrival found the man passed out on his bed.

While he may not have bumped his head, his excessive consumption of liquor more than accounted for a crippling headache and his inability to get out of bed…

Unfortunately for the man, his earlier behaviour had resulted in three police officers standing at the foot of his bed – and from there it was impossible to avoid the glare of bright lights emanating from his wardrobe…

Beneath the lights were two thriving cannabis plants – surrounded by quality fertiliser and a sophisticated watering system (clearly the man took much better care of his plants than he did of taking care of himself).

Needless to say, the cannabis plants were seized – and the man woke up in the Gympie Watch House with both a hangover and a court appearance for producing dangerous drugs (the fine for which was $990).

While there are currently debates on the use of parts of the cannabis plant for medicinal use (in which the harmful cannabinoids are removed) there is no such debate occurring in relation to the use of Ice (methamphetamine).

There is absolute consensus that Ice is a drug which is devastating small communities such as ours, and – if it were to take root here – would see a major increase in crime and other violent, antisocial behaviours.

An unfortunate development in all of this is that we recently located a ‘meth lab’ right here in town following a vehicle intercept containing a Gympie man. The vehicle was found to contain glassware, chemicals and other items – which led us to a Kurrana Street address.

Detectives and specialists from Brisbane’s Illicit Laboratory Investigation Team spent an afternoon in the house, removing chemicals and other equipment used in the manufacture of Ice (a process which in itself is extremely dangerous as these labs commonly explode).

If anyone has any information about Ice dealing here in Rainbow Beach, do the whole town a favour and let us know directly, or via crime stoppers on 1800 333 000. It will save all of us some big headaches…