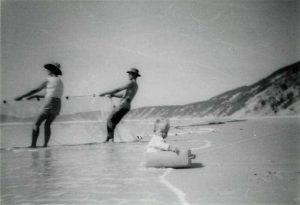 In the last issue we sailed through Ian Dean’s early years on the Cooloola Coast, spent some time touring Fraser Island and had a crash course on the history of the barges. This month we hear more tall tales about boats, fish and a shed load of ice!

During the infamous “barge wars” era, prices went so low that people were actually paid a carton of beer to head to the island!

“Oh yeah that was big, I was in the news nearly every bloody day, I still have some news clippings lying around here somewhere.”

About 18 months after Gordon Elmer decided to call it a day,  Ian was approached by investors to start operating another ferry service.

“I brought a barge up from Melbourne, called it Perseverance. It was early ‘90s, must’ve been about ‘92, I think.”

But with license and insurance costs to pay and a competition that was running for free, Ian decided to cut his losses.

“Sid bought the landing rights off me and I sold that barge and it went to Yeppoon to do the north west island run.”

Ian found himself skippering once again, taking passengers and cars from Redland Bay to Stradbroke Island. One day his boss came to him with the offer too good to refuse; “a little holiday”, repossessing a barge from Thursday Island back to Redland Bay.

“What a trip! With no navigation gear and a compass incorrectly reading, it took me three weeks. I didn’t even get paid for that job! It was all a learning curve, y’know, barbeque talk now.”

It was also the straw that broke the camel’s back, after months working away from home, he missed his family and returned to Rainbow to start work building yet another boat.

“I built the Marlynn, a steel 36 ft twin screw. This was built for whale watching! By the time I got it finished they had changed the rules and needed a permit from marine parks to operate.

“You had to go to tender for it but I was outside the region, so I just turned that into a charter and fishing boat, then I sold that off and they took it up north.” 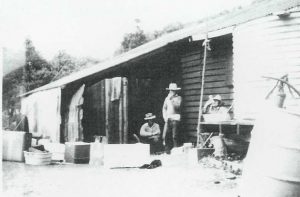 Desperate times called for desperate measures and Ian was forced to take on some unusual work. He was approached by a Fijian company to harvest sea cucumbers! But the stench from processing them made him so ill that…

“I am going to start an Ice Works.”

Ray queried him on his plans.

“Yeah, but what are you going to do when it gets quiet?”

Starting in March with a small ice machine, he filled a shipping container ready for his first Easter. Unfortunately life and the weather had other plans.

“Easter came and so did the rain. It took me until August to empty the container!”

Things quickly picked up with the business handling fish from local beaches, reefs and Fraser Island, allowing them to expand the business and Ian to finally pull up anchor at home with his wife and family.

“Marilyn and I have been together for 30 years, she was living in Gympie and was the publishing manager at Murray Views souvenir shop. She came down to be property manager at Rainbow Beach Real Estate.

“It was about the same time I built the new factory in Karoonda Rd, and again, another boat in the backyard called X-ice. This is the last one!

“I didn’t have the first Ice Works here, Sunny Chaplain had one up at Double Island Point. There was a big frontal dune just this side of Middle Rock, it went all the way up towards the lagoon area.

“National Parks actually had a big camping area there but the toilets and everything got washed away and they shut it all down. Sunny had his huts in the middle of where that little lagoon is now, that’s how much erosion’s taken place. It’s all natural, things change.”

Ian worked with Sunny’s crew for a short time, fishing for mullet. They would catch fish through the day, then return to the shed to ice down fish that they held in old apple crates.

At night they would take the fish down the beach to Tewantin, where they had their own barge, unload at the Noosa fish board then come back up the beach and be ready for daylight the next morning!

Handing over the reigns

In 2005 Ian received some unfortunate news and was diagnosed with cancer. With doctors giving him a 10% chance of surviving three months, he was advised to get his affairs in order and enjoy his last Christmas with his family. That was 13 years ago.

“I just sorted myself out, Marilyn did a lot of research, I had a bit of research in my head, bits and pieces from other people. I wanted to give it a try and we went from there and to this day I’m still clear.

“There’s probably another 50 or 60 people I’ve helped out there that should be dead too, I call in and see how they’re going, all good!

“That’s what this place is about, it’s such a small community, everyone knows something to help. Every now and then I go in for a check up and they say it’s nothing but a bloody miracle.

“My health scare led me to step back somewhat and let youth take over. My son Tony handles most of the day-to-day, but the whole family helps out; my grandkids Jack, Kasey, Maddie and her partner Mick are all integral. We will start our 26th year this month.”