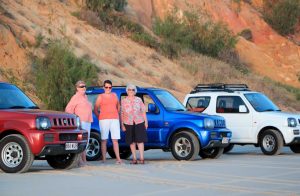 Carmel Darcey, Heather Robertson and Margaret Ballantine make up an amazing trio of ladies. Restless and at a loss after retiring they decided to do something about it.

Carmel, who was in the human services industry most of her working life, was feeling a sense of loss of purpose and identity.

“I went from being frantically busy to nothing…it was a huge adjustment, it was awful. I even toyed with the idea of offering a counselling service to retirees who felt the same,” explains Carmel.

“I was planning on going on a holiday to Switzerland, I couldn’t believe how expensive it was, I couldn’t justify spending that much on a week’s holiday!”

Carmel saw an ad for a Suzuki for sale, “I went and had a look, the man took me for a drive and I was hooked …I bought it. It has been the best investment, much better value than a holiday!

“If you had told me two years ago, I would be driving around K’Gari (Fraser Island) and Double Island, in a 4WD, on sand, by myself, I would have said you were mad,” laughs Carmel.

“The freedom it has given me is amazing, you can’t put a price on it. I have been on K’Gari 10 times in the last 12 months!”

The confidence and joy it has given Carmel is obvious; when you talk to her about her escapades, she literally glows.

She has since been joined on her four-wheel driving journey by two other ladies who were also feeling at a loss.

Well-known and loved local Heather Robertson (Mrs Robbo) had owned a 4WD for most of her life when her kids were growing up and really wanted to get one just for her.

“Financially I couldn’t afford it for a long time, then things changed a little bit and I thought bugger it, I am going to get what I want.

“I wanted a Suzuki and looked for a fair while, then I saw one advertised down at Maroochydore. I went down and had a look and that was it. It was meant to be mine.”

Heather continues “I just love it, it is so much fun. The size suits me and it gets me out of my flat and into this beautiful area of ours.”

Margaret is a relatively new resident of Rainbow. She always wanted to live in Rainbow Beach but never really thought it would happen.

“After retiring I came up for a visit and a look around. A house at the Shores was the right price, so I went home and told the kids I was moving and here I am.”

Margaret was introduced to the 4WD life by Carmel. “I went to Fraser with Carmel, as her navigator. I had never been in a 4WD before. That was an experience I will never forget.”

Heather insists Margaret was jealous of her and Carmel owning two cars each and decided she needed to get a Suzuki as well!

“I was too,” she laughs. “I wanted a Suzuki, so I went into Gympie and asked the car yards. They didn’t have anything. Then two days later the salesman rang and said I don’t know how you did it but we have a Suzuki for you!

“The funny thing was it was from Rainbow Beach, the guy who owned it couldn’t sell it here so took it into Gympie. I bought it back!” says Margaret.

“My first try by myself was frightening, my heart was thumping and I got stuck, but I got myself out and I was hooked.

“Our next outing was breakfast down at Double. I drove with Heather in the passenger seat. It is so good to have the other two with you, it makes me feel safe.

“I honestly never thought I would drive a 4WD,” she continues “I thought I was too old. You are never too old.”

They all agree that they have learnt by their mistakes and know there is usually someone willing to help you out if you get bogged.

They all have their own reasons for loving the 4WD life. Carmel is a mad bodysurfer and loves being able to go up to Double to catch some really good waves.

Margaret is a keen fisherman and is rapt that she can get to more places to throw in a line. “Not that I catch anything!” she adds.

Heather is just happy to have the freedom to get out and enjoy the beach, even venturing to Teewah and Tewantin!

So if you see the red, blue and white Jimneys tootling down the beach, give them a wave and know that life doesn’t end when your working life finishes, these three are living proof of that!

Carmel sums it up nicely. “You only have one life, and there is always something out there for you, it might take a while but you will find it.”