Did you know Cooloola had a heritage trail?

Pick up a Gympie Region Heritage Trail Guide from your local library and have a flick through. It has been updated to include additional state-listed heritage sites, including the Cooloola timber tramway complex. 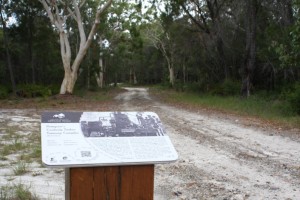 It was our first time down Pettigrew’s Road, which is 4WD access only. You will need a permit, or exemption, from the National Parks and Wildlife Service office.

The drive alone is worth the trip. But you appreciate it more when you are familiar with the history of the area.

This was the first major private railway in Queensland and operated from 1873 to 1884. Timber was one of the most important industries in our state’s history – with the Wide Bay-Burnett region leading the way. 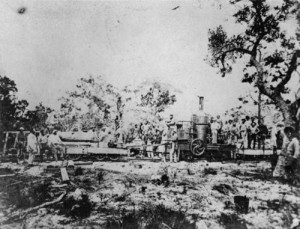 The Mary Ann at work

However, there is little evidence left. The Pettigrew’s Cooloola timber tramway complex is significant because it provides us with tangible access to Queensland’s early timber industry and the development of private railways in the late nineteenth century.

We know there was very little infrastructure around Rainbow Beach 50 years ago. But one hundred years before that, timber getters needed enormous courage and fortitude to work in the harsh terrain of this remote area.

Surveyor and land agent, William Pettigrew, established Queensland’s first sawmill in Brisbane in 1853. It was here he met another Scottish man, William Sim, an experienced timber worker. The partners built a new sawmill in Maryborough, called Dundathu, in 1863. This successful venture soon supplied timber to Sydney, Gladstone, Rockhampton and Bowen. 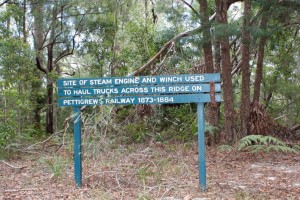 The site of the engine is marked clearly

Pettigrew’s discovery of Kauri pine in Woolann (around Lake Poona) fed the Dundathu sawmill from the 1860s. Demand increased after the Gympie gold rush in 1867.

“Early timber-getters are recorded as using a corduroy crossing of tea-tree branches and saplings to cross the tidal flats in the northern Cooloola area.[27] Pettigrew’s men dragged the logs to the mouth of Seary’s Creek, tied them into large rafts and towed them through the Tin Can Bay Inlet, Great Sandy Strait and up the Mary River.” (from https://heritage-register.ehp.qld.gov.au/placeDetail.html?siteId=25912) 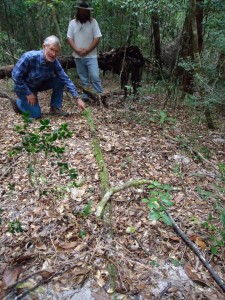 A May 2013 expedition headed south into the scrub from the site of the steam engine winch – some of the tramway is still visible. This is where they felled the more substantial trees Image Grant Phelan

It was tough. There was a lack of feed for livestock, and our sandy environment made Pettigrew recognise that a tramway could be the answer.

Construction started in 1873 when extraction of timber had moved south of Woolann to Thannae Scrub, via Cooloola Creek.

The tramway had only been opened for three weeks, when William Sim was crushed and killed by a huge tree he was unloading. Just over half of the 11.27 kilometre line had been constructed.

Pettigrew continued to work with his partner’s family, and extended the tramway in two directions. From the inland terminus at what later became the forestry department’s Camp Milo to Broutha Scrub, and from Cooloola Creek to Poverty Point.

Driving down the Eastern Firebreak road, the magnitude of the tramway construction hits you. A cut and fill section was built to keep the tramway flat; Pettigrew filled the gully with sand from the cuts. This admirable feat was completed in the scrub, with nothing but bullocks and horses.

The heritage website states that the complete route of the tramway is currently unconfirmed, but is aligned with the Poverty Point firebreak and Pettigrew’s Road. 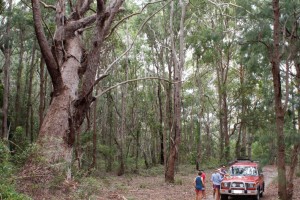 Allow plenty of time and pack a picnic!

Look out for clearly visible depressions along the road and the absence of regrowth and where trees have arched over the track. At the top of the ridge above Broutha Scrub is a sign indicating the original site of the stationary winding engine.

It was here that Mary Ann, the first steam engine built in Queensland, hauled loaded wagons to the foot of the ridge, and the from the other side of the hill another engine, Dundathu, moved them to the coast.

Driving through the magnificent forest, you cannot help but wonder what it would had been like if the giant Kauris had remained. The tramway is located in a picturesque backdrop – close to beaches, lakes, inlets and creeks.

By the 1890s, due to timber exploitation, there was a decline in the industry in Cooloola. William Pettigrew petitioned for conservation in Queensland Parliament. Although parts of our bush were designated as reserves, proper management of them wasn’t undertaken until an Act was passed in 1906. 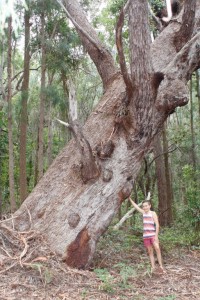 Pettigrew’s Road is a 40-kilometre circuit that takes a few hours – we stopped frequently to move branches off the track. Bring plenty of water and a picnic. We didn’t see another soul as we drove through the rainforest and wallum scrub.

The Cooloola tramway complex includes the tramway route, the site of the first terminus at Cooloola Creek, the remains of the Poverty Point jetty and the site of a steam engine and winch. Remains of the tramway go deep into the forest, but the road still travels through history, and is well worth exploring.

The updated heritage trail follows the success of stage one, which gained the National Trust of Queensland Heritage Award. There’s more to explore at: http://gympieheritagetrails.com.au

It was thanks to the Heritage Register, Gympie Regional Council and the Queensland National Parks & Wildlife Service that we were able to include the history of Pettigrew’s Tramway Complex.