Home  »  Community   »   Historical Cooloola – Inskip Point: as it was 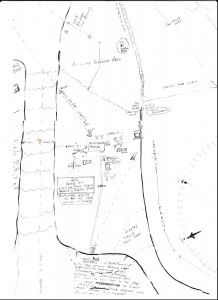 by Marion Young, author of “Lights of Cooloola”

Charlie MacDonald passed away in the mid 2000’s. Charlie grew up at Inskip Point with the family and lived in Maryborough.

He drew a map of the point and wrote this letter to me some time before he passed away:

The house now as we marked it on the map was south about 3 to 4 miles from the beacon lights, quite a long way. Could be about 4 miles.

The grave of the Boson of the Dorrigo is to the north, about 100 yards on a rise in the ground, not far from the house.

Now, about Inskip Point. My father took over from Elliott Gorman in 1926.

Also another type of house we called the office block, that was also to the north of the house.

One grave was 50 foot out from the flagstaff. I am not quite sure what ship he was off.

There were two more graves near the leads for the Sandy Straits. That was the Reilly girl who was accidently shot by her brother. Also another grave at the south of the house at Inskip near the back beach. It was called Shorty Smith’s grave.

Copies of Marion’s book can be purchased at Rainbow Beach and Cooloola Cove newsagents.