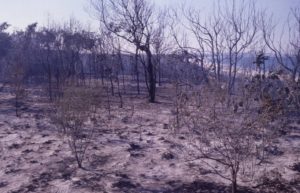 The Rainbow Beach fire of September 1984 leaves the dunes blackened

With cool, dry air and an increase in southerly and westerly winds, winter is the time to be vigilant when it comes to fire safety and prevention. Our historical writer, Ian Ross remembers the bush fire of 1984 that started in Laurie Hanson Park, Rainbow Beach…

Laurie Hanson Park was named after Laurie Hanson who had been a local councillor. In earlier days, Laurie had been the co-owner of a motor dealership in Gympie known as Hanson and Coburn. Laurie Hanson was the salesman and Len Coburn was the mechanic.

Today, the recently upgraded park is very popular with visitors and locals alike as it has some of the best amusements for children in the area.

I would like to take you back 34 years to September 28, 1984.  In those days the park was dense bush, accept for some rough tracks that led to the stairway to the beach. Kirchner Avenue did not exist and the bush extended to the boundary of our property at 1 Ilmenite Avenue. 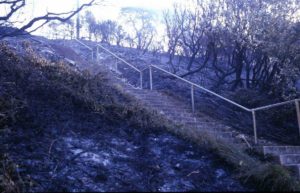 The steps didn’t stop the fire in 1984 – it’s hard to believe these are the same steps which are now brightly painted in all colours of the rainbow!

We had gone fishing that day, towing our boat with our Land Rover and leaving our Holden in the yard. On our return, we noticed thick smoke on the horizon but didn’t think a lot about it until we arrived home and saw the bush alight and fire heading our way.

Luckily, there were plenty of locals on the scene who had physically dragged our locked car away from the flames. The local volunteer fire brigade, which had not long been formed, arrived on the scene and began the process of damping down, but the bush was burnt out.

There had been strong southerly winds that day and no rain for some time, so the bush had burnt fiercely and quickly. The cause of the fire was never established but probably started alongside the concrete ramp leading to the beach.

There is always the need to be vigilant and have fire breaks in place.