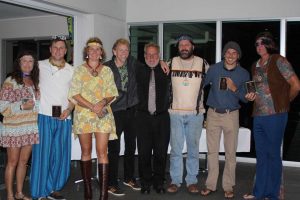 That’s right! Over 5500 hours on the beach patrolling, as well as keeping our Nippers safe every Sunday morning.

Led by Mark Lawler, 30 cadets in two separate week-long live-in camps, and four adults over eight weekends were put through their paces to gain qualifications.

He thanked Nerissa Legge for organising Nippers over the last three seasons, to his amazing wife Tracey, “who has the food tent humming with all your cheerful helpers” and to ” humble and dedicated leader” Club President Shano, “the work you put in for this club is insane”.

Brad personally thanked Nigel Worthington, admin officer, Nicole Lunney, the team upstairs at the Supporters Club, Bruce, Tanya, Dave and the staff, as well as the amazing job running of the club that the executive do.

“I personally know each and every one of you, something I am very proud of, as this to me is what sets us apart from our bigger clubs down the coast. With just under 100 active members, we again achieved our goal of zero deaths between the flags.”

Many awards are listed in the photos captions, as well as:

“We as a group sometimes don’t stop and think about what we actually do here, but it is massive. There are twelve families out there tonight with a loved one they can hold tight and tell them they love them.

“If it wasn’t for you people out there, that situation may be entirely different. So take the time to give yourselves a pat on the back because you deserve it.”

If you haven’t seen it yet, check out RBSLSC member Floss Adams’ inspiring video on the Bronze Camp, showcased at the award night: https://www.youtube.com/watch?v=MK80KiGLGTc 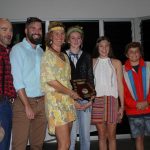 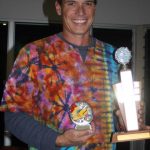 A huge help, literally single handed he can set the beach up in record time, he also assisted in team five’s only rescue this season, the Most Efficient Patrol Member and a “damn nice bloke to boot” Michael Brantz 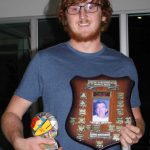 Described as a joy to have on patrol, one of the first to lend a hand and he throws himself into gaining as many qualifications as the club can offer, Zac Shroeder wins the Peter Bargenquast Award 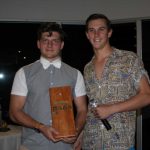 The Most Unusual Experience Award had something to do with an IRB crewie falling in, then a driver flipping the boat, congratulations Edwin Thompson and Alex Wilson

The previous and current administrators of the RBSLSC, Helen Brown and Nicole Lunney in their hippy garb