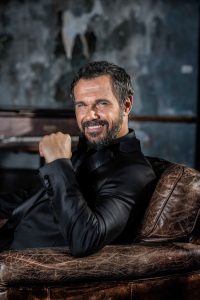 As Heart of Gold launches their twelfth year, the short film festival welcomes accomplished Indigenous Australian actor and festival Patron, Aaron Pedersen. With an impressive body of work spanning more than 25 years including roles in Heartland, Water Rats, The Secret Life of Us, Mystery Road, Jack Irish and A Place To Call Home, Pedersen has been compared to Jack Thompson, one of Australia’s greatest male actors.

“Storytelling is something that I’ve always been a part of. I always wanted to change the dynamics and the canvas of Australian film. I wanted young people to see their own soul. When you see your own soul it invigorates you, it really gives you power, it makes you feel stronger, it makes you believe in yourself and that’s what I want to do. Inspire people to believe in themselves and share their stories.” said Aaron Pedersen.

“I love the fact that Heart of Gold inspires filmmakers to shares stories that have heart and uplift the human spirit” said Pedersen.

Heart of Gold is the biggest short film festival in Queensland and new Artistic Director Lydia Fairhall is excited about putting her stamp on the upcoming festival, ‘Our twelfth festival will be a celebration of storytelling and community, a moment in the year to pause, reflect, inspire and connect.’

“This year we will be looking through the lens of mosaics; drawn to stories that show that from brokenness comes deep transformation. In 2019, The Heart of Gold International Short Film Festival is an affirmation of the fact that pain is real, but so is hope and restoration” said Fairhall.

Over four days the festival will screen more than 100 short films from all genres, alongside an exciting extras program of workshops, family activities, free events and filmmaker discussions to delight filmmakers, film lovers and local audiences.

This year’s program sees the introduction of In Conversation – where a panel of film makers, community members and experts gather to create dialogue and engage in critical conversation around an issue close to the heart on Friday evening.

Running alongside two new screening sessions of related films, In Conversation explores the topic  “Renewed Agriculture: First Nations Futures”. Featuring eco- documentary makers, farmers and First Nations land management specialists, the documentaries will explore renewed agriculture and movements across the country that reinvigorate and heal the environment and each other, promoting the idea that caring for country, is caring for each other.

About Heart of Gold

The heart of short film in Queensland, Gympie comes alive with film lovers from far and wide to celebrate short films that are uplifting, heart-warming and inspirational during Queensland’s biggest short film festival, Heart of Gold International Short Film Festival on the first weekend in October.

Heart of Gold programs carefully-crafted short films from around the world that deeply resonate with the viewer. The four-day program includes up to 30 sessions of shorts from all genres that best capture Heart of Gold’s vision to screen films that are heart-warming, thought-provoking and entertaining. The films can be edgy, they can be ground-breaking and they can be downright hilarious – as long as they beat with a good, strong heart.

With films from renowned international festivals such as Cannes, Sundance, Berlinale and Venice, past winners of the Heart of Gold Best Short film award include James Lucas and Mat Kirkby for The Phone Call (2014) and Lucy Gaffy for Dream Baby (2016), who went on to win an Academy Award and an AACTA respectively.

For more information about the festival, please visit: www.heartofgold.com.au

Be sure to keep up to date with all the latest on Heart of Gold by following us: