Dress to impress and make a night to remember at the Tin Can Bay Country Clubs New Years Eve! The Shades of Grey ‘Masquerade Party’ has free entry – no charge and no set menu. The Chinese restaurant is open as normal and there is no set dress, people can dress formal if they wish.

The music starts at 7pm  Shades of Grey promise honest classic rock, played with plenty of heart and soul and probably a little too much sweat!

Shades of Grey is an old school rock band. Together they have almost 100 years of combined performance experience, most of which they can’t remember! Based on the Sunshine Coast in Queensland, the band members all have their own musical influences from 60s rock and roll, blues and Australian rock, to some slightly obscure bands.

They have put together an eclectic mix of songs that will bring back great memories of going out to see live bands in the old days.

The Bowery Boys at the Sports Club

Hard hitting Rockabilly trio, The Bowery Boys are based on the Sunshine Coast Queensland. With guitar, double bass and drums, this little band has a big sound.

Enjoy live entertainment from 8pm till late, with free entry and a courtesy bus available. See you at the club! 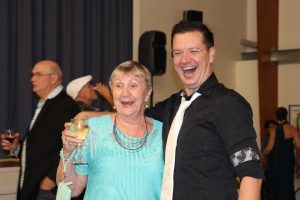 New Year’s Eve is a chance to dress up and celebrate, like Betty Freeman and Andrew Hawkins at the recent ArtyBall

Fireworks in the Bay

As part of the awesome Tin Can Bay Christmas Carnival there will be crackers of epic proportions.

To bring in the New Year, sit back and enjoy some local entertainment while the kids let loose in the carnival. So the whole family can enjoy the spectacular, the traditional fireworks will let fly about 9.30pm.

For those in the Tin Can Bay area with pets, keep them safe and secure during both fireworks events to avoid the heartache of a furry runaway.

The ‘Borrow My Heart’ hit-maker rose to fame after placing third on the fourth series of Australia’s Got Talent in 2010 and as runner-up of The X Factor Australia in 2013.

The family-friendly free event will kick off at 6pm and finish at 9pm with a fireworks display. Free rides and kids’ activities will also be held throughout the evening, as well as food stalls and a cash bar. Bring along a blanket and/or chairs.