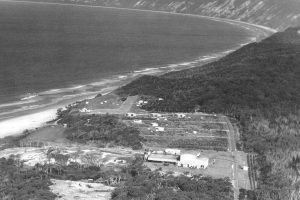 We all know and love this town, and many know a little of its beginnings, however very few know it all and lived through it.

Bryan Smith first visited the town in 1965 and was one of the first builders here. His wife Christina joined him from Brisbane in 1973 to move into a home Bryan had built and they still live here today.

Christina received a grant from RADF to research and interview the employees of the sand mining company which started our town and this forms most of the information below.

In December 1964 the first bulldozer was brought in to work on the building of the road. This was operated by Arnold Coombs, who worked with the Council on the road construction and later, the clearing for the power line. 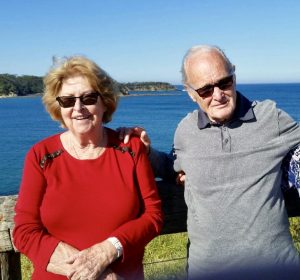 The construction of the 19-mile road into Rainbow Beach was a joint venture between QTM, the Widgee Shire Council and the Department of Main Roads.

During this year, discussion was held in Council for a suitable name for the area and application was made to Queensland Place Names Board for Rainbow Beach to be accepted as an appropriate name.

The town of Rainbow Beach was not gazetted until 1969.

When the Cooloola National Park was gazetted in 1971, plans to mine Double Island Point area folded and the company moved to the southern part of Fraser Island. They ceased mining the area in 1976.

The first shop in Rainbow was a small store owned by Phil Rogers in what is now called Phil Rogers park. His shop wasn’t always open but when it was, he would sell pies, drinks, lollies and local fruit he picked up on the way to Rainbow.

The ‘town’ started with three mineral sands houses, a few caravans and the surf club. A few caravans used the area, including one owned by my parents, John and Barbara McCarthy, who parked their old round-topped marine ply van in the park from 1965.

We will have the next chapter in our November Issue.