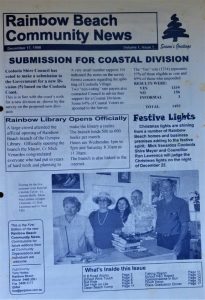 The front cover of the first Rainbow Beach Newspaper produced on December 17, 1998

So where were you 21 years ago? I know where Caroline Taylor was because she was in the first issue of the Rainbow Beach Community News, as it was called then.

Also on the front page was a submission for coastal division (5) and of the 64% who responded to the survey, 57% of those voted yes in support of a Coastal Division.

‘The Club at the end of the Street’ (RBSLSC) advertised New Year’s Eve Celebrations from 9pm to 1am with live entertainment by ‘The Four Clubbies’. Kevin Clarkson was the chef and he introduced the New Year’s Eve Hot and Cold Seafood Smorgasboard – all you can eat for $28 a head.

On page 3, news that the Department of Main Roads was to begin works on the Rainbow Beach Road, which included pavement reprofiling and widening of the existing road to provide a fully sealed formation, including shoulders.

Shelley Jones submitted a piece on the School’s Sandshoe Ball where the sandshoes were stomping and the Dunlops were dancing and the event raised $2000.

And sadly the community lost two valued members with the passing of Bill Mathieson and Peter Bargenquest.

Jim and Scott Fitzgerald were advertising their Christmas turkeys and were open seven days, 7.30am to 5.30pm.

The heading on page four was ‘No Police Station? Back to the drawing board!’ as locals were frustrated as their case was rejected by the State Government. The town was looked after by the Tin Can Bay police who had a ‘mission impossible’.

Pineapples were $1 each, mangoes were $1.50 and stone fruit was only $2.99 a kg at the Rainbow Beach General Store.

The Rainbow Beach Hotel staged Cooloola Coast first bull ride on December 26. Kerry Dreger, Hotel Licensee, said the bull riders are professionals. For the event, 50 tonnes of sand was brought in to cover the bullring to a depth of 8 inches and prize money was $800, with $200 for the junior ride.

The mighty Mikado Licenced Restaurant was open seven nights a week for ‘a la carte dining’, plus Saturday and Sunday from 2pm, where they offered a Casual Al Fresco Blackboard menu on the verandah. (and probably an ale or scotch or two).

Rainbow Shores introduced Rainbow Beach’s only oceanfront and most prestigious development with blocks from $59,950 – or a 1 and 2 bedroom apartment for $125,000.

Rainbow Beach Cooloola Hardware, Rainbow Getaway, Rainbow Beach Real Estate, Coloured Sands Cafe all advertised. Rainbow Fresher Fruit and Vegies and Saturn Antennas were both owned by Peter and Margaret Grant and have been in the paper since that issue. They retired last month.

There was a Year 7 School Graduation Dinner at the Mikado where hosts were Ivan and Ann Judd. The traditional dunking of the School Principal, Mrs Robertson, in the Mikado pool was ‘one of the highlights of the evening’.

Emma Whitney came fourth in the 1998 under 11 years Queensland Little Athletics in pentathlon and Amanda Ahern celebrated her 40th birthday at the surf club.

And lastly the RB Sports and Recreation Club held their Friday Night Seafood Raffles, and the Sunday Arvo Happy Hour from 4-6 with Goose Club Raffles. Entertainment for the month was by ‘Gravel Road’, ‘Sheree Conlon’, ‘On the Prowl’, ‘Rhumbo Dos’ and ‘Old Farts and Sweet Tarts’.