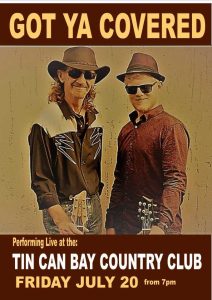 Got Ya Covered are a Classic Rock duo based in Gympie, Queensland, featuring Scott Astill on vocals/rhythm guitar and Daniel Day on lead guitar/vocals.

Scott has been in the industry for over 25 years, both as an accomplished performer playing in bands and behind the scenes doing sound and lighting for local and international acts, such as Guy Sebastian, Brothers 3, Alice Cooper and The Platters.

One of Scotts performing highlights was representing Australia at the 2011 World Championships of Performing Arts in Los Angeles, where he earned two silver and two bronze medals for performances of his original songs.

Dan, who has recently finished studying at Gympie State High, including the Country Music School of Excellence program, has performance experience beyond his years including shows at Tamworth Country Music Festival and Gympie Music Muster.

He is also now in demand as a session and band guitarist with The Dennis Sisters.

See them perform, Friday November 23 at the Tin Can Bay Country Club.