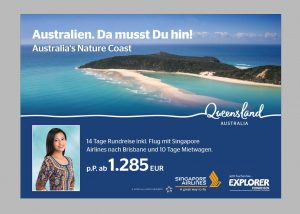 Images of Rainbow Beach continue to feature on international billboards

Images of Rainbow Beach have featured in two billboards recently – working with VSC we secured a prime position billboard in Fortitude Valley for the month of January.

With partners Tourism and Events Queensland, Singapore Airlines and Explorer Fernreisen, one of Germany’s largest travel wholesale companies, an image of Rainbow Beach was chosen for a German-wide campaign.

The Sunshine and Fraser Coasts had huge appeal to the German tourism market because of their connection to nature – whales, dolphins, turtles and our Aussie hospitality.

To the year ending September 2017, German visitation to Queensland grew strongly to reach record highs in total and holiday visitation, up by 6.0% and 9.7% respectively.