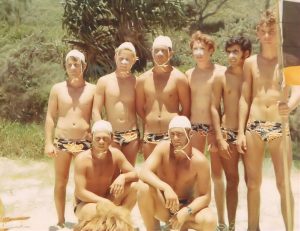 Back: Greg Biddle, Larry Dawson, George Day, Robin Perro, Allan Deen, Wayne Hewitt, Front: Billy Nolan, Garry Hewitt. They are wearing the togs they had to buy the day before to enter the March Past in.

The Rainbow Beach Surf Club was formed in 1965/66 with the required eight members – some of which were borrowed from Noosa to make up the numbers.

Garry Hewitt joined the club in 1968 and is now back living at Rainbow with wife Julie after 30 years in WA, and has a treasure trove of photos from the ‘60s when the world was very different.

He received his bronze medallion in 1968 which he had to complete at Noosa as Rainbow Beach was not on the SLSC map.

His first club captain was ‘Lofty’ Wolgast, followed by Greg Biddle and then Geoff Cooper, before Garry became Captain in 1969, the youngest Club Captain on the coast.

The clubhouse was the old Tamaree Schoolhouse which consisted of a kitchen, dormitory (boys only) and an enclosed veranda which they used for darts and quoits.

Outside was a thunder box dunny and underneath they set up a shower and kept their gear. During these years, few people used the beach so there were more clubbies than public.

Because Garry was underage, he used to hitch down to Rainbow with the Mineral Sands trucks. He did have an old ex-army Willys jeep which he kept parked under the old clubhouse, which was used to run up and down the beach and run gear from the clubhouse (pre police presence…). 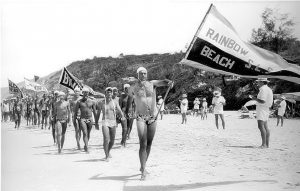 Lofty Wolgast carrying the flag for the club in the first surf carnival ever held at Rainbow Beach in the 1971/1972 season.

The Sunday morning routine was a 6am surf swim, a big cook up and then back to the beach for patrols and club activities – the boys all had to learn how to cook as there were no shops.

Phil Rogers sometimes opened his store which would sell cans of coke and pies.

Garry said: “We had no togs so we rushed into town and bought ten pairs of matching togs and we had no March Past caps so we turned our patrol caps inside out so we would look the same,” he said.

A new club house was needed so a lot of fundraising was done, including numerous chook raffles and a committee prepared to take a second mortgage over their homes to raise the money.

Garry said: “Everyone pitched in to help as much as they could, and the local Widgee Shire Council and the government donated funds too.”

“It took a couple of years to build the new club and we all just made do with what facilities we had for that time.”

At the time, Neil Buchanan was President, Stan Hewitt was Vice, Cliff Kuhn was Secretary, Denny Young was Treasurer and Garry was Club Captain. 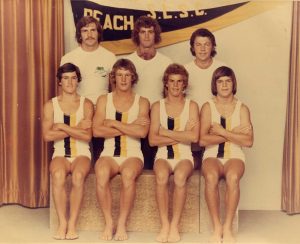 “We developed a unique training method using the heavy wooden surf boat. Once a week we would make the trip with the boat in tow up to Borumba Dam, launch the boat and row up and down the dam.

“We also trained at the Gympie Swimming Pool twice a week – to hone our swimming skills.”

With the new clubhouse up and running they began holding functions on Saturday Nights, such as dances, BBQs, and even bingo, in which Garry was a reluctant caller.

Three of the six-man squad Garry trained with are life members and two, Ron Organ and Ross Kidd, are still active in the club today as part of the ‘old boy’ patrol team who won the best patrol team for the 2018/19 season.