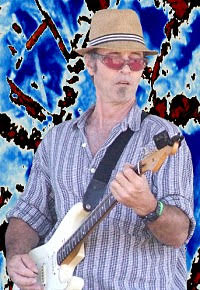 Through his childhood, G.B. Fox was always in school choirs and winning talent quests, singing and playing his ukulele. At 15 he joined his first band, adding guitar, bass, harmonica and drums to his abilities.

By 19 he was among Auckland’s top musos with a residency in one of that city’s top clubs and a song on the radio.

In 1981 he moved to Australia, joined the Sunshine Coast’s top band and found himself supporting Australia’s leading touring acts including Midnight Oil, Divinyls, Cold Chisel, The Angels and many overseas acts such as Canned Heat and Bo Diddley.

From here he toured from the Gold Coast to Darwin with a number of different line-ups, enjoying a good deal of popularity and getting another song on the air.

Glenn, having always been a prolific songwriter, decided in 1988 to form an original band. ‘Abstrax’ won numerous band battles, with Glenn winning the 1994 ‘Most Outstanding Vocalist’ award from the Australian Academy of Music.

He has since taken up sequencing, programming and multi-track recording and has added violin to his instrumental abilities. These skills allow him to have a full backing sound and to play a wide variety of music styles.

He now boasts a fine repertoire to cater for young and old from country to rock, from fast to slow and from dinner to dance.

Singer guitarist, GB Fox brings rock and roll, country and blues from the 50s to the 80s at the Tin Can Bay Country Club, March 15 from 6pm.