Home  »  Community   »   From submarines to volunteering – what a life! 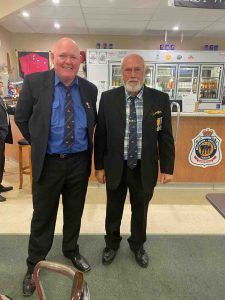 You may run across Karl Hempstead volunteering at Tin Can Bay Coast Guard or at a committee meeting of the RSL sub-branch, but that’s only a small window into Karl’s amazing life supporting the community.

Karl’s working life started in the Australian Navy in the early 1980s, operating in a range of roles including as an acoustic warfare analyst and as a medic. He served on a number of submarines over 20 years including the HMAS’s Otama, Orion, Otway and Collins.

Karl said it was not unusual for submariners to be at sea for over four months at a time and not get to breathe fresh air during that time. He was awarded the special operations medal and clasp for clandestine operations in the submarine squadron.

Recently the Tin Can Bay RSL was the location for a chance meeting of six former Naval submariners. Karl said that it was rare to have six former submariners meet anywhere in Australia, much less in a small town like Tin Can Bay!

The submariners included Pat Cahill, who lives in Victoria but happened to be in Tin Can Bay on holidays for ANZAC Day.

It is poignant that the chance submariner get-together almost coincided with the loss of an Indonesian submarine, crewed by 53 men in the Bali Sea. It highlights the risks faced by our brave armed forces personnel as they serve our country.

After leaving the Navy, Karl joined the Queensland Department of Primary Industries (DPI) as a Land Protection Officer working in partnership with landholders and local government to control pest plants and animals.

He was based in a number of Western Queensland locations including Burketown, Mt Isa, Boulia and St George. He also joined the Army Reserve, ran Army Cadet units and was a driving force in the Burketown SES.

In 2019 Karl retired from the DPI and moved with his wife, Julie, to Rainbow Beach initially, and then Tin Can Bay.

Karl was keen to continue to support the community so he joined the Tin Can Bay Coast Guard. His current position is Flotilla Administration Officer, a task that keeps him very busy. He is also on the committee of Tin Can Bay RSL sub-branch.

As Karl explained, “It’s great to continue with volunteering, which I’ve always done, to help support the community. I love it here, it’s like paradise.”

And we love you Karl – thank you for your service!