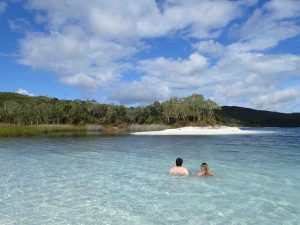 Michelle du Toit from @RomanticExplorers arrived on Fraser Island the day it reopened to tourists, mid-December. She said, “Getting there, we were expecting everything to be black and burnt.

“I’m so excited to share; the main tourist attractions are as beautiful as ever! That’s thanks to many people’s hard work to reduce the fires, including Queensland Fire and Emergency Services.

“We were some of the very first tourists allowed back on the island. It turned into a once-in-a-lifetime experience for us when we discovered we had the main attraction, Lake McKenzie, all to ourselves, for a few hours!

“It was an unreal experience that felt on the same level of incredible as our wedding day or jumping off our overwater bungalow in Bora Bora.

“So grateful this paradise is only three hours drive from our hometown Brisbane. If you get the chance to go to Fraser Island for a romantic getaway, GO!

“The sooner, the better – not only will you have an incredible experience, but you’ll also be supporting many hard-working people on the island after they’ve faced many challenging months.”

Tourists returning to K’gari have been a great relief for Rainbow Beach resident Nigel Worthington, owner of Fraser Island Beach Houses. “It has cost us $70,000 and we’re only one small business on the island.”

He also acknowledges the impact on his home town: “People stop here for fuel on their way over, and their way back, they stop for coffee, breakfast or lunch.”

Something that Sharon Parker from Ed’s Beach Bakery can attest to, after spending 15 Christmases working the business.

“The flow through to Fraser is our biggest money maker. We noticed an immediate drop off as soon as they shut down and a drop in sales. Yesterday’s low tide should have been pumping, but today has had a slight increase in trade.

“I’ve reckon they’ve gone somewhere else, as people were worried it wouldn’t be open in time for Christmas.”

As Tourism and Events Queensland’s (TEQ) Good to Go campaign continues to roll out, we need to spread the word that Fraser Island’s big drawcards – Lake McKenzie, Central Station and the ancient rainforest of Pile Valley, Eli Creek and the Maheno Wreck are pristine – and waiting for you!

The campaign aims to inspire interstate visitors to stay longer and spend more in Queensland.

Nigel is also President of Rainbow Beach Commerce and Tourism, and shares that the recovery (with the exception of backpackers) after shutdown and prior to the K’gari fires and Inskip Point closures was “off the scale”.

Nigel says, “After 18 years owning a business on Fraser Island and 12 years in Rainbow Beach, I have never seen the level of activity and have not seen numbers like this since 2006/2007.”

He reports it is an unprecedented level of activity, with the majority of people new to town. Other accommodation providers have also said we have not seen this happen here before.

“Primarily it has been off the back of four-hour drive time. This is the maximum distance before air travel because airlines won’t get back into full force until borders are open,” he says.

“We are in the Goldilocks zone. We have nature, fabulous beaches and lifestyle.”

With the pandemic continuing to evolve and impact industries and communities, the Queensland Government is continuing to update its COVID-19 website to keep our tourism industry, its people and tourists informed and safe.