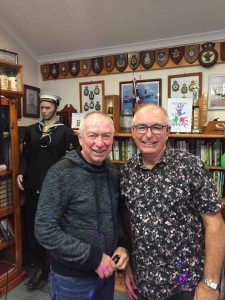 Barry Wilkinson, former drummer for Wickety Wak chatting to local crooner Keith Miller during a break in the entertainment

Former Wickety Wak drummer Barry Wilkinson recently holidayed in Tin Can Bay and took time out to attend the Tin Can Bay RSL Sunday Barbecue. The Wickety Wak Show Band was renowned in Queensland for its live shows from the early 1970s through to the turn of the century.

One of Barry’s fondest memories of his time with the band was a 16-week gig, four shows per day, entertaining Aussie soldiers in Vietnam during the Vietnam war.

Barry’s lunch at the RSL bought back vivid memories of his time with the band in Vietnam. He said, “It was a great experience, full on, but so fulfilling to play to the soldiers, often just a short distance from the front line.”

Barry and his wife and friends from Brisbane thoroughly enjoyed their time in Tin Can Bay over Easter, despite the inclement weather.