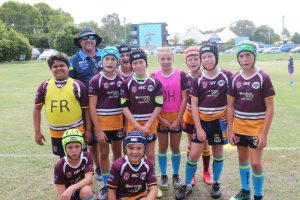 This year, the Gympie Devils Junior Rugby League Club ran an abbreviated competition in line with Covid-19 restrictions, with matches for Under 6s through to Under 11’s playing at Albert Park, Gympie.

In 2020, a number of Rainbow Beach boys and girls joined the comp in the Under 10s/11s age bracket.  Given the level of interest at a local level, the team was provided with a unique opportunity to train locally in Rainbow Beach.  This saved hours of travel to and from Gympie each week and increased the number of participants able to play in the side.

Throughout the season, games were played on a Friday evening at Albert Park. Many of the players in the Rainbow Beach team had never played rugby league before and they should be proud of the effort, energy and perseverance they displayed when playing against seasoned Gympie players.

Their skill development over the season was remarkable and they were competitive in all their games, but most importantly they had fun and consistently showed good sportsmanship.

The end of the regular season culminated in the inaugural ‘Bush versus Beach’ Under 10s/11s football exhibition matches, hosted at the Rainbow Beach Community Oval last month.

A massive thank you to our sponsors of this event for their professionalism, support of grassroots sports and commitment and generosity to the Gympie Devils Junior Rugby League Club.

The afternoon was a phenomenal success with our Under 10s/11s battling it out on the football field.  For the Rainbow Beach players, it was their first time playing in front of a home crowd and didn’t they love it!

It was wonderful to see so many locals cheering on all our boys and girls and enjoying a family afternoon out.  A very big thank you to our Gympie-based teams who travelled to Rainbow Beach to play and support the event.

2021 is shaping up to be another great year for Gympie Devils Junior Rugby League. It is hoped that we will continue to train at least a team at Rainbow Beach in future years to provide our boys and girls with the chance to experience the awesome game of rugby league!