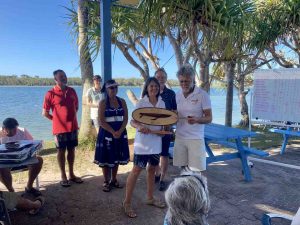 Crews were tested with the tidal stream and the vagaries of the estuary. A total of 14 boats competed with crews coming from Darwin, Lake Macquarie, Brisbane and seven local boats.

Greg and Laurie Williamson looked like cleaning up with three first places on the cards, but the current and past National Champions, Ashley Smith on Sake and Chris Villa on Up Ship Creek dominated the final two races.

After five races only two points separated the top three positions, with Chris Villa and Mark Holmes taking out the Queensland Championship.

Silver division was dominated by Neil Lestor and Graeme Dobson on Saffron and by Michelle McAndrew with kids Ava and Alex in the classic division. Graham and Di Lee on Free to Air won the Handicap series.

Christmas has come early for the Yacht Club. Last month a 10 kW solar system was installed on the clubhouse roof with thanks to the committee, grants officer Peter Hogg and Ken Bubb for their hard work in making this happen.

The launching ramp has been refurbished and the grassed area is recovering well. The dining area has new tables and chairs, all in time for the Christmas celebrations.

The club was ‘spruced up’ for the new year and everyone is looking forward to normal sailing again.