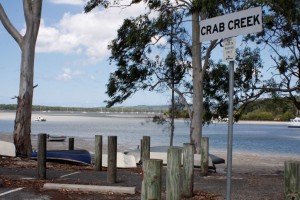 Apparently we are now in autumn, however someone appears to have forgotten to tell that to summer as it’s been a pretty hot and muggy week with temps in the 30s.

Well, two weeks after Cyclone Marcia dumped heavy rain on SEQ, Tin Can Inlet is starting to clean up, although there is still some dirty water around.

On the fishing scene there have been some good hauls of mud crabs from the creeks.  We recommend trying areas such as Teebar, Carlo and Crab Creeks.

The shallow reefs around Tin Can Bay have been a little hit-and-miss over the past week, with a few reports of undersize squire, sweetlip and cod.

If you’re looking for a feed of flathead try around Ida Island or Alligator Creek. Estuary cod and mangrove jack have also been reported to have been coming from the creeks.

There have been a few nice Golden and Diamond Trevally being caught around Norman Point and in Snapper Creek.  Choose lightly weighted baits of prawn or live herring, which have been in abundance of late.

Mid-March big cod were being caught, with one almost 6kg fish weighed in for our ‘fish of the month’ competition. Bait of choice was a whole sand crab.

Earlier in the month, there were plenty of schools of herring in the bay, with the public jetties in Carlo and Snapper Creeks being a great base to throw a cast net or use a herring jig.

Squid are active around Norman Point at present and we should see them hanging around for the next few months.

Offshore is firing well with mahi mahi, amberjack parrot and red emperor being caught. The close in reefs are fishing well for Pearl Perch, Hussar, Cobia and Moses Perch.

Beach travel from Rainbow south to Double Island Point has been a little tricky last month, with recent storms exposing plenty of rocks. Although it was possible to navigate the rocks at dead low tide, it was best to take the alternative route via the Freshwater Track, as Mudlo rocks have claimed three vehicles in one week.

Don’t forget we are open from 6am daily for all your boat hire, bait and tackle needs – including rod repairs. Until next month, be safe on the water.