Fishing Classic Reeled in the Prizes

This year’s Rainbow Beach Family Fishing Classic saw a surge in competitor numbers and nightly visitors in the outdoor venue.  This solidified the belief, alongside the event survey, that these changes were a direct result from moving the event from the end of July to the second semester June QLD school holidays.  Next year’s event has been announced for the same holiday period July 4 to 12, 2014.

The week started out wet and the fishing challenging, however, windblown determined faces still lined up to weigh-in their daily catch. The offshore conditions were an absolute right off, right up until 4-5 days into the comp, so the majority of competitors fished the beach and estuaries.  During the worst weather, the biggest over all fish for the comp was caught, a stunning 19.350kg Mackerel caught by Gary Enkelmann from off the beach on Fraser Island.

Within the Junior Division of the competition we saw some amazing fishing skills from our local youngster, Mason Bignell, he caught a bream weighing in at 1.070kg, on one of the most challenging days, and outperformed both the Adult and Cadet Overall competition leaders.

The Cadet division also uncovered another shining fishing star, young Bryce Francis who has been fishing the competition for years.  Bryce nailed a Whiting weighing in at .485 beating the Overall Adult competition leader, Gary Madden.

Once the offshore weather came good both the reef fish and big fish category catches put on a nice show for the competitors and for visitors during weigh-in and presentations.  The overall leader of the Red Emperor species was Kelvin Steinhardt weighing in a Big Red at 14.115kg and there were some very noteworthy efforts in the Cadet division. Nathan Mann caught a Snapper 6.350 which took out overall Cadet Winner of the Snapper species beating the Overall Adult winner Ryan Jones with his Snapper weighing 5.960. Another Cadet Jasmine Sanders took out the overall winner of the Sweet Lip Cadets division with her Sweep Lip weighing in at 3.570.

This year was the return of our major sponsor XXXX and they provided a huge amount of support.  XXXX brought their Outback bar for Thursday and Friday night and ran the XXXX island promotion worth over $10,000.00.  Sheryl Dohle from Donnybrook won the fantastic prize even though she wasn’t a competitor this year; Sheryl has been a competitor for many, many years and was accompanying friends and family who were competing.

This year it was nice to see a good amount of local business support and I would like to take the opportunity to thank all the local sponsors for supporting this year event.  Local sponsorship not only covers a nights worth of Adult prizes but it also provides valuable in-kind support.  It also demonstrates to our visitors the most important thing of all, and that is, community spirit.

The business side of this great annual event.

This event brings more than $1million dollars into the community and the results of the competitor survey shows that these visitors in fact support our local community in return.  The survey targeted many areas such as accommodation choices, community friendliness, event organisation and shopping trends.  Specifically asked was the question, “During the event how often did you find yourself/family spending money in the local shopping precinct?” 35% answered Very Often, 61% answered often and only 4% answered Never.

It is also very evident that the event grew in numbers this year due to the simple fact that it was moved to school holidays.  This means that businesses are not losing anything by the event been moved but in fact are gaining more business.  Specifically, business revenue is only been moved from one month to the next.  Next year’s event will be held in the same month as it has always been run so business revenue will be shown in the same month. In addition these competitors  were asked “How likely are you to return to Rainbow Beach for just a holiday?” and the result was outstanding; over 10% answered have booked already, 84% answered very likely, and less than 6% answered not likely.  This means that we get two bites of the cherry and for those activity based business that see little direct business from the fishing comp get another chance of capturing this audience on their return visit.

The school holiday period also provided an opportunity for some local kids to be involved as volunteers.  These kids did an outstanding job and the skills they learnt, I’m sure will go a long way in helping them in their future pursuits. I hope next year we see a few more local kids approach us to help during the event.

From all the responses received during and after the event we believe next year we will see even further growth and maybe even reach our target goal of over 800 competitors. 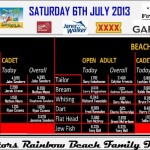 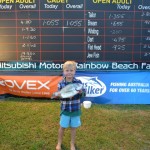 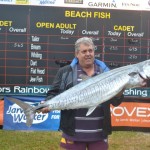 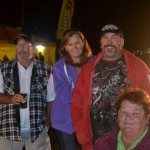