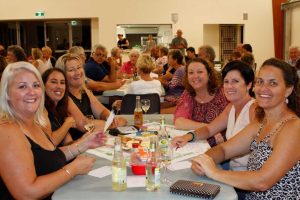 When you sat down at the annual Rainbow Beach State School P&C fundraiser – you knew it wasn’t going to be your typical  evening of trivia.

Dry spaghetti and play-doh were waiting with the brain teaser pages. Later in the night, teams rallied to build the tallest structure – and our team ‘Bunch of Fives’ won.

With effortless-looking talent, Mike jumped his way into the skipping winners, but our luck stopped there, despite the “official bribes” or hint donations! However, with our table positioned between ‘Bad Mums’ and ‘Mums Gone Wild’ we were in no better place to party.

I now know that there are nine gallons in a firkin (that’s about 40 litres), Don Bradman’s batting average to a decimal point (99.4) and that Murder She Wrote is set in the fictional Cabot Cove, Maine, and so much more!

The ciders and beers were replenished before play even started (thanks Heatley) – we’ve noted ‘more beer’ next year! A big thank you to all the supporting businesses: we munched on the IGA’s Jatz and Arco’s pizza, and Mrs Young’s class raffled away trays from Rainbow Beach Meats and Rainbow Beach Fruit.

Andrew Hawkins from Rainbow Beach Realty was a stellar MC – again! Even singing a little for us… We also thank our bartenders extraordinaire – Shane Mahn from 13th Beach, Kim Falconer from Keely Rose Fishing Charters and Charlie Caesar.

We organisers were thrilled with the attendance, thank you all who came along for the fun or just the wine or cheese. It was lovely to see so many newbies to town – what a fitting introduction to Rainbow society.

Thanks again to all who helped with tickets, promotion and setting up (kids too) – everyone mucked in at the end to pack away and tidy up our beautiful hall! And I need to give a special mention to Zumba ladies Lynda, Lorna, Bev and hubby for travelling across.

Despite the best efforts of the 12 opposing teams, ‘Grogan’s Heroes’ won again – that’s the cluey, competitive teachers. Yes, I am glad they are educating our children, but we’ll look forward to someone wresting that perpetual propeller trophy off them in 2017!