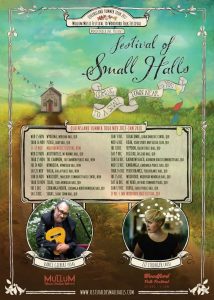 American folk raconteur Vance Gilbert and Australian singer-songwriter Liz Stringer kick off the Festival of Small Halls Summer Tour 2017 this month, and the pair are counting down the days.

“…bringing the music to regional folks removes a light layer or film of music’s arrogance and audacity. It makes the music work a bit to be part of the fabric of the place. That’s authentic.’ says Vance.

Vance Gilbert has released 12 albums over a career spanning more than 25 years. He has opened for acts like Arlo Guthrie and Aretha Franklin and he even has a song on a Grammy-nominated children’s album.

But when asked, his audiences recall the warmth, the humour, the rare bond that the mischievous performer creates with his audience. His guitar playing “gives you a feeling of utter joy” (Dirty Linen Magazine) and his shows are those rare events in which “people lean forward in their seats as eagerly between songs as they do during them” (The Boston Globe).

This will be Vance’s debut trip to Australia.

Homegrown talent Liz Stringer has risen meteorically in the international music community. She recently recorded her album at Type Foundry Studios in Portland, Oregon and has been so in-demand on the North American touring circuit that dedicated fans back home began to worry they’d lose her. Festival of Small Halls has snagged the Melbournian just before she heads back to Canada to record yet another album.

“I’ll be looking for stories out on the road!”, Liz said.

However high her star rises, Liz still signs off her own Facebook posts as ‘Stringzy’ and loves the Australian community.

“I’ve always made a point of doing a lot of regional touring. Small towns have personalities and stories that can be a lot easier to access, because of their size. Australia is a big, diverse and beautiful country and touring in regional areas gives me the opportunity to see more of the country and learn more about Australia, and the different experiences of Australians, from the locals. The best stories I’ve heard have been told to me by locals in small towns,” said Liz.

The Festival of Small Halls is a unique regional touring concept, working with community groups and regional councils across Australia to take some of the best international and national music into rural and remote areas of Australia.

Woodfordia Inc, producers of the iconic Woodford Folk Festival, The Planting Festival and the Artisan Camps commit to touring the finest music to the far-flung corners of Australia and ensuring no town that wants a good show has to go without – no matter how far the distance.

The tours are designed to be annual affairs, with the same communities hosting a tour each year, building on the night to start to include workshops, local artists, street fairs – whatever will make the show unique to that location.

“Festival of Small Halls is designed to be an annual affair,” said Producer Eleanor Rigden

“Communities can build on it every year, adding workshops, street fairs, even more music – the list is endless. This means more arts, more opportunities, and more wonderful shows in regional Australia,” she said.

Tickets are on sale at www.festivalofsmallhalls.com and at select community outlets.

The Festival of Small Halls Summer Tour 2017: Mullum to Woodford is presented by Woodfordia Inc in partnership with the Woodford Folk Festival and the Mullum Music Festival and is supported by the Queensland Government through Arts Queensland.