Home  »  Things to See and Do   »   Fast and furious action promised during Ocean Roar! 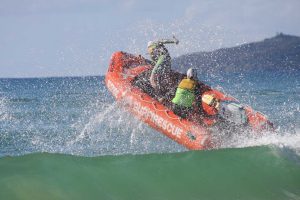 The high-octane IRB series Ocean Roar hits Rainbow on June 1 and 2 so make sure you head to the beach to watch the IRB’s (inflatable rescue boats) in action.

The series sees hundreds of surf lifesavers fire up their IRB engines for SLSQ’s Ocean Roar series and put their surf skills to the ultimate test.

As competitors from Surf Life Saving Clubs around the state fight it out for surf supremacy, you can watch it from many vantage points including the beach bar, and enjoy food by Beauty and Beard.

The teams simulate rescue situations and test the abilities of drivers and their crew, and is a precursor to the Queensland IRB Championships.

Come and join the teams and spectators to experience Round 4 of the series and have a fantastic day.