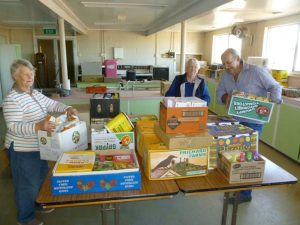 After a whirlwind (two-night, 2500+km) trip to Longreach last month, advocate Tony Stewart dropped off a big load of grocery items and toiletries.

“It was an afternoon start to dodge the rain,” said Tony, “ With pickups at Tin Can Bay, Kilkivan and Chinchilla, where I picked up parcels from the Drought Angels and camped the night.

“It was a 4.30am start, stopping to unload some goods at Ilfracombe then unloading the balance at Longreach, before heading back to Alpha for the night.

“Plenty of Roos tried to run into me as I headed to Emerald by 6am for a brekky pie with my ex Pastry Cook, Lex,” Tony continued.

“The country out west has been transformed to a sea of green from what I saw, but I didn’t see west of Longreach, where there are still pockets of dry country.”

Tony said, “The drought may be nearly over but the hardship will continue for a long time. It doesn’t rain money.”

Tony added, “To anyone that has helped a huge thank you as our total contribution nears $50,000.

“After consulting with other drought coordinators, I envisage there will be another contribution towards the end of August, and as well as food items any items of clothing will be gratefully accepted.

“Also the trolley at IGA is still accepting donations. Thank you Matt, Bernie, the family and the friendly staff.”