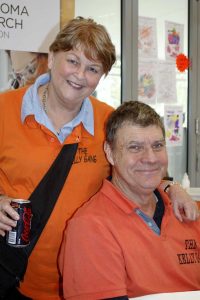 It is sad news, but the Rainbow Beach Pig Day Out is not to return.

The event was created by Terri and Bruce Geissmann in memory of their daughter Kelly, to raise funds to prevent melanoma.

“After five planned dates in four years that we cannot beat the damn rain,” said Terri.

“As much as this devastates us, we could see no other way out but – oh boy! Wasn’t it fun while it lasted!”

“Last year, the first date in June was cancelled due to a severe weather event. Our July date did go ahead despite the bad weather.”

The couple send huge thanks to all the locals and visitors, Rachael Sporn from the Australian Melanoma Research Foundation, Doctor David Smith with the free skin check clinic, and family and friends who travelled far and wide, who braved the wind and rain to support the cause.

“Unfortunately, the event itself was not financially viable due to the bad weather and we had outstanding expenses.”

A September holiday Barefoot Bowls day at the Sports Club included raffles and auctions that were held back due to bad weather.  What great fun that was – thanks to Ricky and his team of workers.

“I would just like to thank a few people who worked their butts off right till the end, even though there was no end in sight for quite a while.

“Dianne Major and her two girls, Sara and Jasmine, Rachel Croker, Kirstie Jordison, Maree and Phil Herron, Michelle Gilmore and of course my husband Bruce, who had to put up with me being a stress head for the last four years.”

All proceeds went directly to the Australian Melanoma Research Foundation with the final donation of $2051!

Said Terri, “Once again, I thank everyone for all your support. It has just been awesome, as our Kelly would say!”