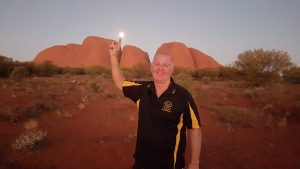 Dave Hewitt will be missed greatly by all who knew him – photo at the Olgas on a recent trip with wife Kerri.

Dave Hewitt was a thoroughly decent man. He possessed many of the qualities we all aspire to and that define our preferred view of the quintessential Australian character.

Family was always at the centre of Dave’s world. Dave and Kerri have travelled from Perth to Townsville and everywhere in between to visit family and be present at milestone events.

A highlight in his life was meeting Kerri Hardiker. With the birth of Amy, David’s family was complete. He and Kerri enjoyed similar pursuits; family, camping /caravanning. The last long trip was to Western Australia and return. Just two weeks prior to Christmas, David and Kerri spent a fortnight at the Noosa Caravan Park with David indulging in his passion for ski paddling.

When older brothers Gary and Wayne joined the Surf Club, Dave followed. The Rainbow Beach Surf Lifesaving club was to become a central part of his life, an institution he devoted enormous time and effort to, and which in turn, bestowed upon him the special honour of life membership.   Dave conducted his last beach patrol on November 30 just four weeks prior to his death.

For a time in the late 1970s, Dave was fulfilling a number of roles simultaneously. He was Club Captain, he was filling the role of Chief Instructor including the actual training, and organising members to attend Surf Carnivals.

Additionally he ran the Friday night raffles at the Imperial Hotel and coordinated the Weekend Dinner Raffle, where one group of members would sell tickets in the hotels outside Mary Street and another group the Mary Street hotels. Naturally, it was obligatory to partake in a few XXXX’s at each venue to keep the host on side.

Dave was an accomplished ski paddler, revelling doing 360s on big waves on a short wave rider ski whenever the opportunity arose, but he was also a very good competitive racing ski paddler.

Dave will be keenly missed by all who knew him, but our special thoughts are with Kerri and his extended family. The esteem in which Dave is held was evident at the gathering at the Surf Club and again at his funeral. Rest in Peace Dave.

(An extract from a speech made at the funeral by lifesavers Kim McCarthy and Mark Langton.)